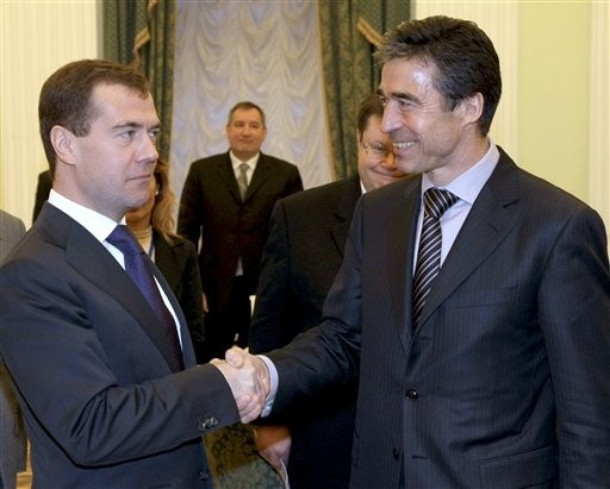 From DPA:  NATO and Russian leaders might have to meet in person to end the deadlock over military and security cooperation, Russia’s ambassador to the alliance said Friday.

Over the last 18 months, both sides have proposed new cooperation projects in what they portrayed as a bid to move the relationship onto a new level of friendliness. But each side has met the other’s overtures with scepticism, leaving their high-profile ideas grounded.

The two sides "could need a conversation at the very highest level" to break the deadlock and move talks into new territory, Ambassador Dmitry Rogozin said after the last meeting of the NATO-Russia Council (NRC) before the summer break. …

The ambassador also said that NATO should pay more attention to Russian ideas, after his country proposed a new treaty on security in Europe and asked the alliance to define precise limits on how many foreign troops it could deploy near Russia’s borders.

NATO ambassadors refused to discuss those ideas, saying that there were other places to do so, such as the Organization for Security and Cooperation in Europe (OSCE), Rogozin said.

Discussing minor details of practical cooperation "means more to them than new, legally-binding forms that could fix the relationship between NATO and Russia," he said.  (photo: AP)