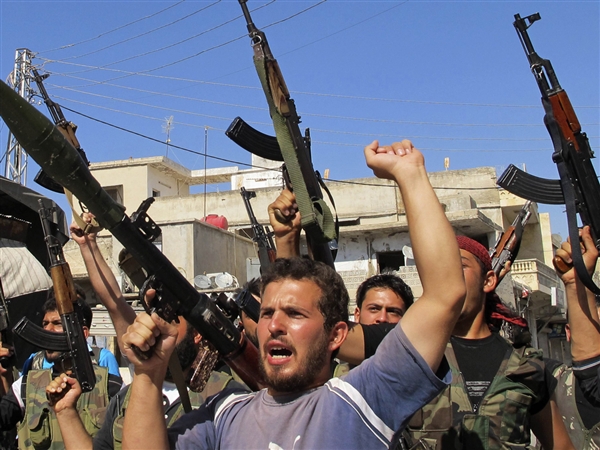 From Steve Gutterman, Reuters:  Rebel forces are gaining ground against the Syrian government and could win the war against President Bashar al-Assad, the Kremlin’s envoy for Middle East affairs said on Thursday.

Deputy Foreign Minister Mikhail Bogdanov also said Russia was working on plans to evacuate its citizens from Syria if necessary.

"One must look the facts in the face. The regime and government in Syria is losing control of more and more territory," the state-run Russian news agency RIA quoted Bogdanov as saying.

"Unfortunately, a victory of the Syrian opposition cannot be ruled out."

His remarks were the clearest sign yet that Russia is preparing for the possible defeat of Assad’s government in a conflict that has killed more than 40,000 people since March 2011.

"We are dealing with issues of preparations for an evacuation. We have mobilization plans and are clarifying where our citizens are located," Bogdanov said.

Russia has shielded Assad’s government from U.N. Security Council censure and sanctions, resisting Western pressure to join efforts to push him from power.

President Vladimir Putin and other Russia officials have repeatedly said Moscow is not trying to prop up Assad but that he must not be ousted from power by external forces, citing the principle of non-interference in sovereign states’ affairs.

"Moscow will continue to insist upon the implementation of the Geneva communiqué and a peaceful resolution of the conflict," he said, according to RIA.

From Ellen Barry, New York Times:  Fyodor Lukyanov, the editor of Russia in Global Affairs and head of an influential policy group, said that even if Mr. Assad left the country, his countrymen would keep fighting.

“The prevailing view is that it will be complete and desperate chaos,” said Mr. Lukyanov. “To remove Assad will not mean settlement of the Syrian conflict. You can remove him — I don’t know in which way — but what will you do to 300,000 Alawites? They will be fighting for their lives, not for power anymore,” he said, referring to the minority sect that rules Syria.  (photo: Reuters)