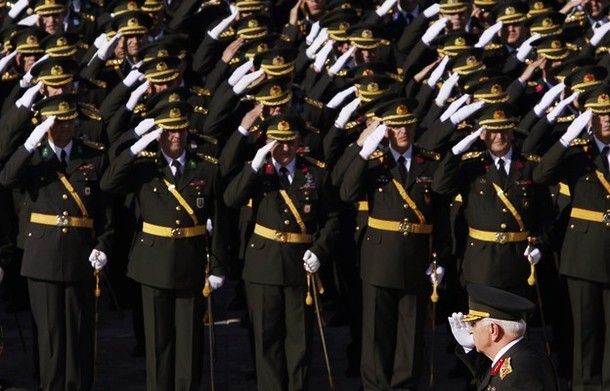 From Adm. James Stavridis, U.S. European Command: I attended a fascinating event on Friday night in Ankara: the change of command ceremony for the Chief of the Turkish General Staff, the senior military officer in Turkey.

My very close friend, General Ilker Basbug, was bringing to a conclusion two years as the Chief of Defense and more than 50 years in uniform. He was commissioned in 1962 and serve through a long and distinguished career, including postings outside of Turkey in Belgium and England, among others.

He was relieved by General Isik Kosaner, another superb officer who has commanded at every level and holds a deep expertise in Special Operations, very useful given Turkey’s ongoing conflict with Kurdish separatist terrorists and much combat in southeastern Turkey. …

In attendance were the President, Prime Minister, Defense Minister, and many other leading civilian politicians. I had a chance to chat with each of them and thanked them for Turkey’s contributions to the NATO missions in Afghanistan and the Balkans.

They both acknowledged the vital importance of civilian control of the military, as well as the need for the Turkish Armed Forces to continue their role in protecting Turkey in a turbulent world.

General Basbug expressed frustration at the negative role the media has played in a variety of events in Turkey. He was very open and honest in his remarks. At one point in the evening he said, with a big smile on his face, “I have done my best, and I still have the energy of a Lieutenant.”

General Kosaner spoke at length about the geopolitical situation facing Turkey, saying a sentence or two about each of Turkey’s neighbors, from Iran (we need to solve the nuclear problem with diplomatic means) to Afghanistan (the comprehensive approach that protects civilians is key).