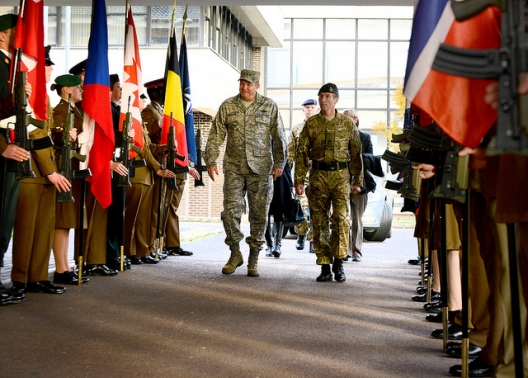 Options being considered by U.S. Air Force General Philip Breedlove include putting a U.S. warship in the Black Sea, beefing up previously scheduled NATO exercises and improving the readiness of the alliance’s 13,000-member rapid-response force, according to an American defense official who spoke on condition of anonymity to discuss military planning.

“We directed our military commanders to develop additional measures to enhance our collective defense and deterrence against any threat of aggression,” Anders Fogh Rasmussen, secretary general of the North Atlantic Treaty Organization, said yesterday after NATO foreign ministers met in Brussels. . . .

In a statement, the foreign ministers pledged to provide “appropriate reinforcement and visible assurance of NATO’s cohesion and commitment to deterrence and collective defense against any threat of aggression to the alliance.”

The statement left open whether NATO will set up permanent bases near Russia’s border. The alliance limited its troop presence in eastern Europe when it started expanding there, partly to avoid antagonizing Russia.

Asked if the options NATO is considering include moving alliance ground forces permanently to eastern Europe, [Secretary of Defense Chuck] Hagel said, “We’ve to be prepared to deal with any contingency and all options.”

From Naftali Bendavid and Lukas I. Alpert, Wall Street Journal:  Mr. Breedlove said he would give NATO representatives a list of options, but would also submit his specific recommendations as to which ones to choose. The options would cover land, sea and air, he said, as well as the northern, central and southern sections of Russia’s western border.

“This new paradigm, and these actions by Russia, clearly should cause us to rethink our positioning and posturing of NATO forces,” Gen. Breedlove said.