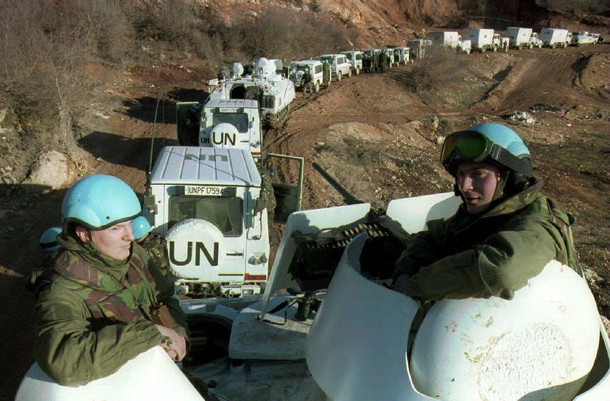 From Aida Cerkez, the AP:  "Safe havens" for civilians in Syria? Think twice, Bosnians would warn.

With the U.N. unable to agree how to protect civilians against Bashar Assad’s forces, Western officials are discussing creation of safe corridors to deliver aid to Syrians trapped by the crackdown.

Similar measures failed badly during the war in Bosnia two decades ago that killed over 100,000 people and left millions homeless. The lesson of Bosnia is that without all sides honoring the agreement — and without a robust military response in case they don’t — such measures may have little effect and could actually prolong the misery.

In 1993, the U.N. Security Council passed a resolution that declared six cities in Bosnia as "safe havens" for civilians and deployed military observers to monitor the situation.

The U.N. protected zones in places like the capital of Sarajevo or the eastern enclave of Srebrenica in effect became prisons, subject to relentless shelling by Bosnian Serb forces that often denied they were responsible. The U.N. never managed to get enough aid through the corridors and smugglers made fortunes. . . .

Instead of stopping the bloodshed, they simply reduced it to a politically acceptable level. It enabled both the attackers and the resistance to continue fighting.

Without a quick political settlement, neither side could achieve victory and both staved off decisive defeat. It was not until Serb forces overran Srebrenica in July 1995 that the West could no longer sit and watch and deployed troops to stop the carnage.

The enclave fell after senior U.N. commanders rejected a request by a few hundred Dutch peacekeepers deployed in Srebrenica for air strikes and its Muslim Bosnian residents swarmed a U.N. military base, still believing the Dutch would protect them.

But outnumbered and outgunned, the U.N. peacekeepers allowed the Serbs to separate women and children from men and execute some 8,000 males in what later became known as the worst massacre in Europe since World War II.

Hans Blom, who oversaw a Dutch government-commisioned investigation into the Srebrenica massacre, said he is "very pessimistic" about what the international community can do in Syria. He voiced skepticism over the U.N.’s concept of "safe zones" or "safe areas," calling it a very vague notion and difficult to enforce. . . .

Blom said that for now he doesn’t see a role for international peacekeepers in Syria because there is no peace to keep and any humanitarian workers who were to enter the country would face massive violence. Only a massive military intervention could stop the violence, he argued.

"Only if there is a very determined outside force willing to use military means, it’s maybe possible," he said. "Interventions are a very complicated thing. And the terrible thing, of course, is that doing nothing is as bad."

Aida Cerkez reported from the ‘safe haven’ of Sarajevo throughout the 1992-95 Bosnian war. (photo: Getty)