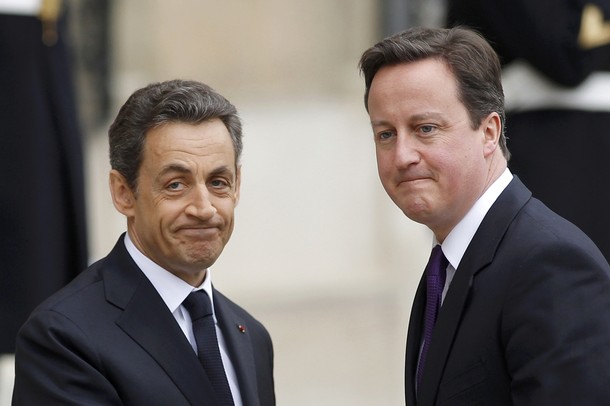 From Edward Cody, the Washington Post:  President Nicolas Sarkozy of France, the vanguard of intervention in favor of rebel forces, met at the Elysee Palace with British Prime Minister David Cameron. The two leaders have been the main actors in the NATO-led air war since the United States handed over leadership March 31 and pulled back most of its aircraft into a support role.

Their goal, a British official said, was to find ways to persuade other NATO nations to invest more aircraft and political capital in the bombing campaign, now being shouldered overwhelmingly by British and French warplanes. Although more than 175 aircraft from 17 nations have joined the coalition, most governments have surrounded their participation with restrictions that prevent them from carrying out effective strike missions against Gaddafi’s forces.

“Clearly, there is a belief that NATO could do more in terms of direct support,” said the British official, speaking on the condition of anonymity because of the sensitivity of the subject.

As Cameron and Sarkozy huddled here, envoys from 20 nations gathered in Qatar, on the Persian Gulf, to lay groundwork for an accelerated push for a diplomatic solution to the Libya conflict. The NATO secretary general, Anders Fogh Rasmussen, reminded the diplomats that NATO’s mission is to protect civilians, not win the war for rebel forces, and he declared that ultimately there is not a purely military solution. …

The Obama administration continued to push back on the suggestion that more U.S. military help was needed. Pentagon officials acknowledged that U.S. aircraft have been flying a small number of combat missions all along — mainly to suppress Libyan air defenses — while leaving the bulk of the flying to allies. But the officials said there have been no specific requests from NATO to bring back more U.S. warplanes.

Likewise, a State Department spokesman said Wednesday that there were as yet no plans for further U.S. military involvement.

“We believe that this operation’s been successful and that, led by NATO, it can continue to be successful,” the spokesman, Mark Toner, told reporters in Washington. Warplanes were protecting civilians and allowing diplomats and others to tackle the separate goal of persuading Gaddafi to leave, he said.

U.S. officials acknowledged that the alliance members who were doing the bulk of the combat missions wanted to see others take on a greater role. “There’s a constant conversation going on about . . . how burdens can be shared,” said a U.S. official familiar with planning for the air campaign. “As this takes on a longer character, the question is — at what point are other countries going to take up some of the slack and some of the burden?”  (photo: Reuters)