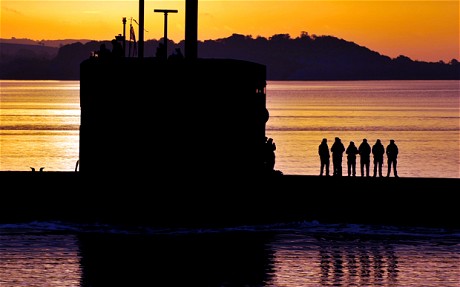 From the BBC:  The Scottish National Party will debate reversing its long-standing opposition to membership of Nato at its annual conference in October.

The party, which has a strong anti-nuclear stance, has opposed being part of the military alliance for more than 30 years. . . .

The SNP says 25 of 28 Nato member countries do not have nuclear weapons.

Should Scotland become independent after the referendum expected in autumn 2014, the SNP said it would remove the UK’s Trident nuclear weapons, based on the Clyde.

From the Daily Record (Scotland):  Current SNP policy favours "co-operation with international alliances such as Nato through its Partnership for Peace programme while not being a member".

The new resolution states: "An SNP Government will maintain Nato membership subject to an agreement that Scotland will not host nuclear weapons and Nato continues to respect the right of members to only take part in UN-sanctioned operations.

"In the absence of such an agreement, Scotland will work with Nato as a member of the Partnership for Peace programme. . . ."

The Nato resolution will be part of a wider foreign, security and defence policy update, which will be put to the vote in Perth between October 18 and 21.

It also includes a financial commitment of £2.5 billion for defence and security, equating to 1.7% of total Scottish GDP, and a proposal for 15,000 regular armed forces personnel, said to be an increase of 4,000 on current levels.  (photo: Royal Navy)