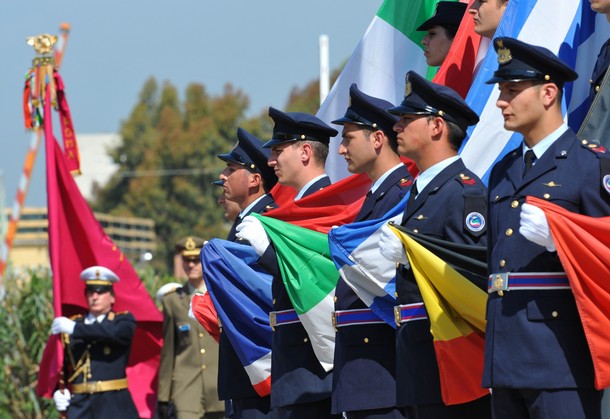 From Anders Fogh Rasmussen, NATO:  Since the day this College was founded, it has been NATO’s foremost academic center.  For almost as long as NATO itself, the College has helped to shape generations of officers for the highest levels of service. And today, its reputation extends well beyond the Alliance.

Since the end of the Cold War, the security picture has changed dramatically. And it is still changing.  NATO has always responded to those changes.  And so, too, has the Defense College.  Let me give you just three examples.

First of all, over the past two decades, security has grown to mean much more than just military security.  Increasingly, it took in many civil aspects too.  And the Defense College reacted swiftly, by expanding its student base to include civilians alongside military personnel.

Today, many of the civilians who have passed through the halls of the College occupy senior positions across the Euro-Atlantic area.  They are enriched by the strategic thinking they acquired here. And they understand the importance of close civil-military cooperation.

We see the enormous benefits of this joined-up approach in our capitals.  And we see them even more clearly where it counts most — on the ground.  In all NATO-led missions and operations, civil-military cooperation has become increasingly important.

A second important feature of NATO over the past few decades has been its emphasis on cooperative security.  Allies moved quickly to offer the hand of friendship, partnership and cooperation.  Initially our focus was on Europe and Central Asia.  But more recently we have reached out to countries in North Africa, the Middle East, and also the Gulf region.

We have offered a wide range of opportunities for political dialogue and practical cooperation.  And the Defense College has played a vital role in cultivating this approach.  By providing a common education to NATO and non-NATO participants, it has encouraged countries with different histories, different cultures and different perspectives to tackle common challenges together.

Finally, the rapid changes in our security environment require us not only to keep up.  They also require us to look forward. To look into the future, to analyse implications for NATO, and to develop policy options for our Alliance.  Here as well, the Defence College has built an outstanding reputation. . . .

For the past 60 years, the NATO Defense College has been at the heart of NATO’s successful efforts to safeguard our freedom and security, and to spread stability.  The College has played a key part in sustaining the common values, common approaches, and common ideas that underpin everything we do – both as Allies, and with our partners.

To all of you who have been associated with the NATO Defense College, I want to say: thank you, congratulations – and happy anniversary!

Excerpts from speech by NATO Secretary General Anders Fogh Rasmussen at the the 60th anniversary of the NATO Defense College.  (photo: Getty)