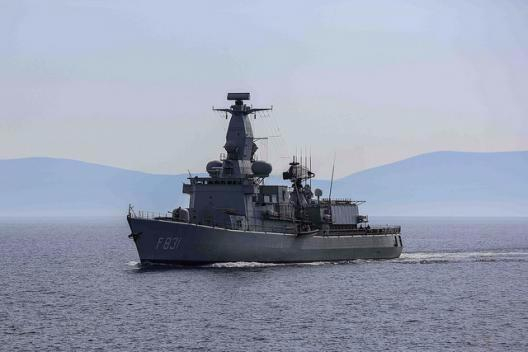 NATO’s presence in the Aegean Sea has been a success and has been important for different reasons.

Partly we have been key in helping Frontex, the Greek and Turkish Coast Guard, to address the illegal flow and the criminal networks facilitating the illegal migration through the or over the Aegean Sea. NATO ships have been very often the first spotters of boats and activities, we have shared that information with local coast guards and they have then taken action. And of course NATO has also been important because it brings together two NATO Allies, Turkey and Greece, a non EU member Turkey working with the European Union Frontex in the Aegean. So when I, I visited for instance the German flagship Bonn, on that flagship we had a of course a German admiral but we also had Turkish liaison officer and a Greek liaison officers, officer, just underlining that NATO brings together Turkey and Greece, EU and NATO in the region. And also the fact that we have been able to work so closely with the European Union I think adds to the importance of this mission. Having said all this of course this is not an open, this will have an end, so we will be there as long as there is support for it in NATO and as long as we deem it as something that adds value but at some stage I also expect that our activity in the Aegean will end.

Excerpt from press conference by NATO Secretary General Jens Stoltenberg at the launch of his Annual Report for 2016; March 13, 2017.