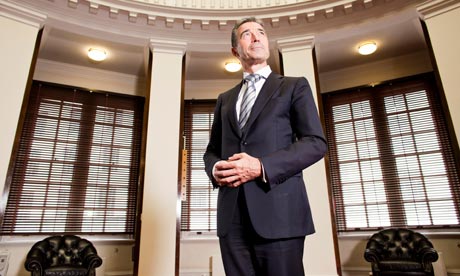 From Julian Borger, the Guardian:  Nato’s secretary general has warned that continued disparity in US and European defence spending might lead to a "two-tiered alliance" in which American and European troops would not be able to fight effectively together.

In a Guardian interview, Anders Fogh Rasmussen echoed the fears expressed last week by the US defence secretary, Robert Gates, about the strains being put on Nato by unequal burden-sharing.

"Ten years ago US defence investment represented almost half of all defence expenditure in the whole alliance. Today it is 75%," Rasmussen said. "This increasing economic gap may also lead to an increasing technology gap which will almost hamper the inter-operability between our forces. The Americans provide … still more advanced military assets and equipment; the Europeans are lagging behind. And eventually it will be difficult to co-operate even if you had the political will to co-operate because of the technological gap."

"Of course it is a matter of concern that only eight allies are conducting air-to-ground strikes. If we are to ensure the long-term sustainability of the operation we should also broaden the support for the operation," Rasmussen, a former Danish prime minister, said.

"The American people ask, and legitimately so, why should we carry the heavy burden to ensure international peace and stability. You also profit from it, so you should also take your share in the burden. That’s Secretary Gates’s message. I share that message."  (photo: Felix Clay/Guardian)