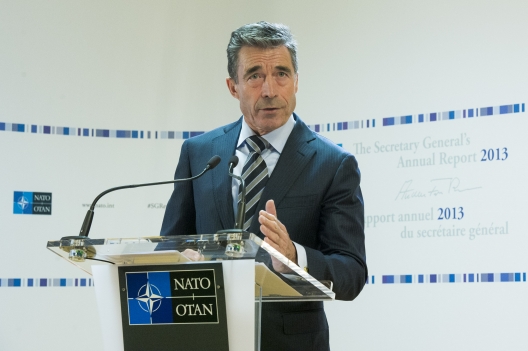 In an unpredictable world, NATO remains an essential source of stability. Against the background of an economic crisis, the new Strategic Concept that we adopted at our 2010 Lisbon Summit has guided the continuous adaptation of the Alliance to meet the demands of a fast-moving security environment. While NATO is now more effective and efficient than at any time in its history, we will need to maintain the momentum of transformation at our next Summit in Wales in September.

Throughout 2013, NATO continued to protect our common values and our shared security. The men and women of our armed forces showed constant courage, determination and professionalism in a wide range of deployments on land, in the air, and at sea. This Annual Report is, above all, a testimony to their service and sacrifice.

In Afghanistan, we reached an important milestone in mid-2013, when Afghan forces assumed lead responsibility for security across the country. Having reached their full strength of 352,000 soldiers and police, their growing capability allowed ISAF to shift from a combat to a support role and prepare to complete its mission at the end of 2014, as agreed at the Lisbon summit. We also saw significant progress in Kosovo, where NATO is providing vital support to the European Union-brokered agreement on the normalisation of relations between Belgrade and Priština.

To continue fulfilling our core tasks effectively, we agreed at Lisbon to strengthen our defences against 21st century challenges. And at our Chicago Summit in 2012, we adopted the Smart Defence mindset, through which Allies work together to acquire capabilities more efficiently than they could on their own. We have been working together in 29 different capability areas, ranging from precision-guided munitions to maritime patrol aircraft, and two projects have already been completed. We also continued to develop our own missile defence system, and enhance our ability to defend against cyber attacks.

In 2013, we worked with our global network of partners to bring security where it is needed, and trained with them to make sure that we maintain the ability to operate together. We also made steady progress in improving the way we work and the way we manage our resources, by reforming the NATO Command Structure, NATO’s Agencies, and our Headquarters in Brussels. These reforms will provide our taxpayers with greater security and better value for money.

Building on the strong foundation that we have laid, the Wales Summit will deliver an Alliance that is ready, robust and rebalanced.

The Summit will take place as we prepare to complete our combat mission in Afghanistan, and plan the launch of a new, non-combat mission to train, advise and assist the Afghan security forces after 2014. In Afghanistan and our other operations, we have learnt many lessons that we need to apply to shape “Future NATO”.

First, capabilities. We must invest in the capabilities we need to deal with the risks and challenges that we face, from terrorism, piracy and instability in our neighbourhood, to missile and cyber attacks. I expect European Allies to play their full part in developing critical capabilities, such as joint intelligence, surveillance and reconnaissance, heavy transport and missile defence. As our economies start to recover, we need to show the political will to keep defence in Europe strong. This will also keep NATO strong.

Second, connectivity. ISAF brought together over one quarter of the world’s nations: 28 NATO Allies and 22 partners in the largest coalition in recent history. Beyond 2014, our forces must stay connected, as Allies and with partners, so that we stand ready to operate together when called upon. At the Wales Summit, we should commit to a broad programme of realistic exercises, demanding training and comprehensive education as part of our Connected Forces Initiative.

Finally, cooperative security. This is one of the pillars of our Strategic Concept and a vital element of “Future NATO”. At a time of global risks and threats, NATO must continue to look outwards. We must deepen and widen our unique network of political and operational partnerships with over 40 countries and organisations on five continents. One area of cooperative security that offers significant potential benefits for Allies and partners is defence capacity building. We have unique expertise, acquired over years of active engagement, on security sector reform, building defence institutions, developing armed forces, disarmament and reintegration, which can add value to broader international efforts. In 2013, we responded positively to the request by the Libyan Prime Minister for advice on the development of his country’s security sector. I believe that similar support from NATO could help others too, and enable us to project stability and help prevent conflict.

As we prepare for the Wales Summit, we draw strength and inspiration from the values that unite North America and Europe in a unique bond. The transatlantic relationship remains the bedrock of our security and our way of life, and 2014 will bring that relationship new vigour and new vitality. A Transatlantic Trade and Investment Partnership can give a real boost to the economic link between the United States and the European Union, while the NATO Summit will reaffirm the essential security link between our two continents and our determination to share the responsibilities and rewards of security.

As this Annual Report shows, over the past four years we have laid a firm foundation for the future. We set out a clear vision in our Strategic Concept, and we are turning it into reality. Our forces are more capable and connected than ever before. We have a record of achievement in challenging operations and world-wide partnerships. And we are continuing to adapt to make NATO more agile and more efficient. Our Wales Summit will build on this foundation to shape “Future NATO”.