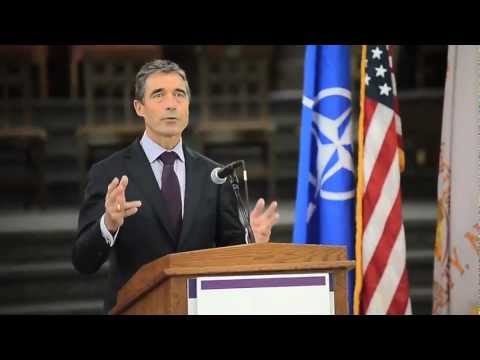 From Anders Fogh Rasmussen, NATO:  The organisation I represent – NATO – is dedicated to such international cooperation. The North Atlantic Treaty Organisation is the strongest military alliance in history. It is made up of the United States and Canada and 26 European countries. Together, we are committed to help each other defend our territory and populations from attack. If one Ally is attacked, we consider it an attack on all; and the other Allies will send their militaries to the defence of the attacked country. This is the principle, “all for one, and one for all.”

NATO has preserved peace and stability in Europe for well over six decades. For the first forty years of our existence, we deterred the aggression of the Soviet Union. Then, after the end of the Cold War, we reached out to help the new democracies of Central and Eastern Europe. And many of them have since become members of NATO. We also stepped in to prevent mass murder and restore stability in the Balkans.

But you may wonder whether the Alliance has any relevance for the United States and for your generation. You may ask: What has NATO done for me lately?

My answer is one word: Freedom. The NATO Alliance is defined not by the threats we face, but by the values we share, and by our shared vision of the future we desire. All 28 Allies are united by the same fundamental values of liberty, democracy, the rule of law, and respect for human rights. We believe that the freedom of the individual is essential to achieving peace among humankind. We are all prepared to defend that freedom. And to fight for it, if we have to. . . .

[W]hen the Danes decided to join NATO in 1949, it was very much in the knowledge that when countries look for security on their own, they usually find only insecurity for themselves and for everyone else. Denmark needed international cooperation for its security. We needed a strong military bond with the United States. And we found it in NATO.

In today’s world, we have all become a bit like Denmark. Because only by working together for our security we can achieve true stability and peace. In our complex, unpredictable and interconnected world, that applies not just to smaller countries like mine, but also to a superpower like the United States.

Just over eleven years ago, terrorists struck at the very heart of this city, and this country. NATO Allies rushed to America’s aid. For the first time in history, we invoked Article 5, the collective defence clause in our founding Washington treaty. Planes flew from Europe, across the Atlantic, to patrol the skies here. We demonstrated in the clearest possible terms that the attacks on the United States were considered an attack on us all.

Since that time, we have stood together as Allies to prevent another “9/11”. We took action in Afghanistan, where we lead the biggest international coalition in recent history, to ensure that that country will never again be a safe haven for terrorists training and planning to strike us at home.

We acted last year over Libya, where we prevented a massacre and helped protect civilians from attack.

We continue to keep peace, and provide a safe environment for all ethnic and religious communities in Kosovo.

We are also present in the Indian Ocean, as part of the broader international efforts to ensure free passage for ships facing the threat of piracy.