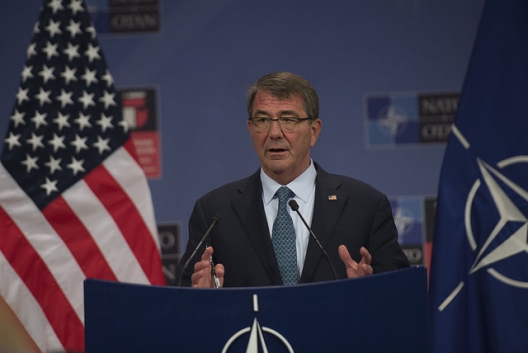 [T]he United States is preparing for a longer-term situation of tension and military competition with Russia. Since the end of the Cold War, the transatlantic community has not had to prioritise deterrence against Russia. Unfortunately, we do now. As a result, the United States is adapting its deterrence posture in Europe, emphasising higher-impact approaches such as rotating forces into Europe, the prepositioning of armour and large-scale exercises throughout the Alliance. Our defence budget for fiscal year 2017 includes $3.4 billion for our European Reassurance Initiative, more than quadruple what we allocated this last year. That will allow us to rotate an armoured-brigade combat team into Europe on a persistent basis, and to preposition another armoured brigade’s equipment to be used by American troops flown into Europe, in addition to the two brigades the United States already has stationed in Europe.

The United States continues to invest in military exercises with allies and partners to demonstrate resolve and build resilience, while enhancing inter-operability. In 2016 alone, for example, the United States will have conducted or participated in at least 175 exercises and events in the Baltic states, including 139 US events (15 in Estonia, 79 in Latvia and 45 in Lithuania) and 36 NATO, national and multinational exercises, events or activities. We expect this frequency to continue in 2017. One example demonstrates the size and scope of this effort: the US military participated this spring in Exercise Anakonda 16, a joint exercise in Poland that included more than 20 countries and more than 25,000 participants, to deepen US and NATO habits of cooperation with allies and partners….

The United States is not alone in this effort. For more than 67 years, NATO has been the quintessential example of nations working together to respond to security challenges. And as it was during the Cold War, NATO will be critical to the security of the transatlantic community in the face of new and renewed threats. Some thought NATO would grow irrelevant after the Cold War. But it proved useful in many ways in the following decades, including by shaping the militaries of new democracies, including Kosovo and Afghanistan.

Today, the transatlantic community faces challenges very different from those of past decades. In the east, Russia is acting aggressively and advancing new forms of hybrid warfare. On the southern flank, the continuing refugee crisis is pressuring domestic institutions, and returning foreign fighters present real security threats. And further abroad, the transatlantic community faces threats in Afghanistan and with ISIL and other terror groups.

The Defense Department is helping NATO grow stronger, more agile and more adaptive so it can meet and overcome these new challenges, and nowhere are these efforts more important than in meeting the threat posed by Russia. Given increased Russian submarine activity in the North Atlantic, we are working with our allies to build towards a continuous arc of highly capable maritime-patrol aircraft operating over the Greenland–Iceland– United Kingdom gap. We are making delivery of Europe’s first stealthy F-35 Joint Strike Fighter aircraft to the UK. And given Russia’s use of hybrid warfare – exemplified by the so-called ‘little green men’ in Ukraine – we are investing in additional rotational presence of US Special Operations Forces, which are particularly well equipped to help allies respond to such activities.

The United States is also encouraging its NATO allies to do more, and to use a new playbook as well. We are enhancing our capability to respond to crises wherever they occur. The Very High Readiness Joint Task Force can deploy Alliance forces on 48 hours’ notice from multiple locations in Europe to any crisis on NATO territory. This is a real innovation, involving commitments from many members of the Alliance to respond to crises involving Russia or any other challenge.

The Alliance is also coming together to strengthen deterrence. At the July 2016 NATO Summit in Warsaw, four NATO countries, including the United States, announced that they will each deploy a battalion to one of the three Baltic nations and to Poland. The United States will lead the battalion in Poland, the United Kingdom will do so in Estonia, Canada will lead one in Latvia and Germany will do the same in Lithuania.

Meanwhile, NATO and its members are also providing support to partners such as Ukraine and Georgia, both of which have seen their sovereignty and territorial integrity violated by Russia. We are helping them to strengthen their capabilities for national defence, improve their ability to work with NATO and reform their defence institutions. These efforts took major steps forward in Warsaw, when NATO endorsed a Comprehensive Assistance Package for Ukraine and a substantial assistance package for Georgia, and with the signing of the US–Ukraine Partner Concept in September 2016 and the Memorandum on Deepening the Defense and Security Partnership with Georgia in July 2016.

Through all of these measures, we are building stronger networked security, enhancing our collective deterrence and defence posture, and demonstrating that Russia’s behaviour does not undermine our alliances and partnerships but rather drives us closer together. Together with NATO allies and partners, the United States is helping stand up for the international principles and norms Russia has been violating.

To ensure NATO continues to do so, all NATO countries must accept their fair share of security responsibility to each other; and as allies we all must choose to invest in, develop and field new capabilities. NATO countries have made some progress on spending: since the 2%-of-GDP pledge made at the 2014 Wales summit, the vast majority of allies have stopped making cuts, and most allies have also committed to at least small increases in defence budgets; but there is still more to do. No country can retrench and escape responsibility for confronting the threats that face us all. NATO has to be more capable – and able, if necessary, to meet two or more challenges at once.