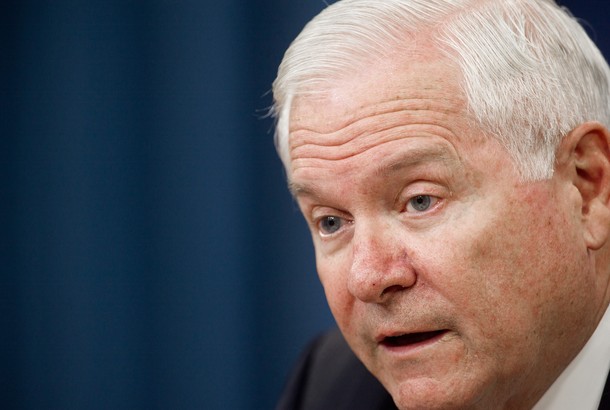 From Josh Rogin, Foreign Policy:  In Washington, you know a decision is controversial when the pushback comes before the announcement. Such is the case with Defense Secretary Robert Gates‘s Monday bombshell that he wants to close Joint Forces Command.

The AP broke the news this morning that Gates would announce at a press conference his idea to shutter JFCOM’s gigantic base in southern Virginia as part of his drive to cut $100 billion from the Pentagon budget. He also announced a 10 percent cutback in the Defense Department’s use of contractors each year for the next three years and pledged to cut the size of his own staff and that of the larger Pentagon bureaucracy. …

JFCOM was last led by Marine Corps Gen. James Mattis, who was recently chosen to succeed Gen. David Petraeus as the head of Central Command. Gen. Ray Odierno, most recently the head of U.S. forces in Iraq, was chosen to replace Mattis and may become the last-ever JFCOM commander. It will take about a year to close the base and Odierno’s mission is to "work himself out of a job," Gates said.

Some of the other announcement Gates made included a freeze on full-time positions at regional commands for three years, a freeze on replacing departing senior-level full-time contractors, and a reduction of the level of senior military and civilian positions pending a review, which Gates predicted would result in cuts of 50 general-level military positions and 150 senior executive service jobs.

Gates will also cut 25 percent of all outside advisory boards and commissions and, in a subtle dig at Congress, place a cap on the number of oversight reports written at the Pentagon. There are 600 people working on such reports, many of which may not be necessary, he said.  (photo: Getty)