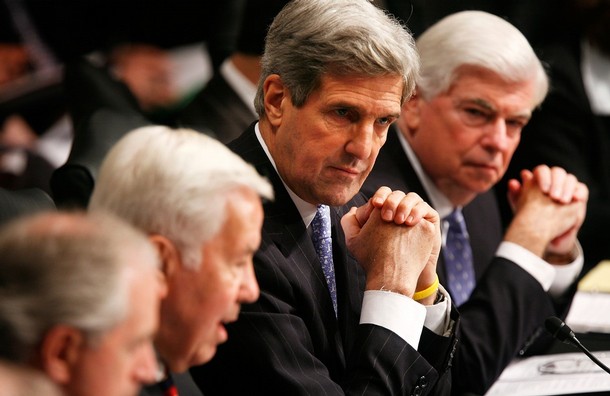 From Peter Baker, the New York Times:  President Obama’s arms control treaty with Russia advanced to the Senate floor on Thursday with bipartisan support, giving it a major boost toward ratification despite the election-year polarization that has divided the parties over so many other issues.

The Senate Foreign Relations Committee voted 14 to 4 to approve the New Start treaty, with three Republicans joining Democrats after the two sides agreed to an accompanying resolution addressing conservative concerns about missile defense and modernization of the nuclear arsenal.

The vote was a rare instance in which Mr. Obama was able to win over more than a single Republican vote for one of his signature initiatives.

Still, he faces a battle to win final approval on the Senate floor. Under the Constitution, treaties require a two-thirds vote in favor, meaning that the president needs at least eight Republicans to vote yes along with the 59 Democrats and independents. Since many Republicans remain opposed to the treaty, the Democrats plan to wait until a lame-duck session after the November elections to bring it to a final vote. …

“By ratifying this treaty, we will limit Russia’s nuclear arsenal,” said Senator John F. Kerry, a Massachusetts Democrat and the committee chairman. “We will regain the ability to inspect their nuclear forces. And we will redouble international support for our nonproliferation efforts. At a moment when the world has imposed sanctions on Iran for its nuclear ambitions, this treaty validates American leadership and moves the world an important step closer to reducing the threat from nuclear weapons.”  (photo: Getty)