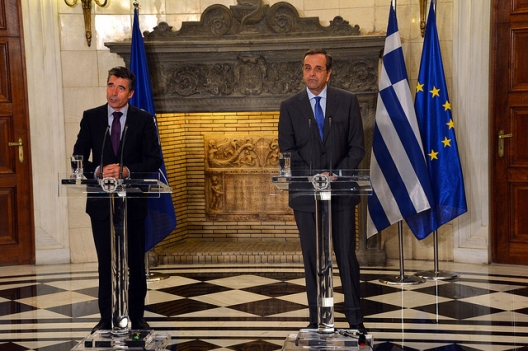 Within its first few years of existence, NATO experienced its initial wave of expansion in 1952 when Greece and Turkey joined the alliance. At the time, the Western Alliance extended its southern flank into the eastern Mediterranean to stabilize the region and check Soviet influence in the Balkans, the Black Sea, the Caucus region, and the Middle East. Greece was on life-support – a mere three years removed from the devastating German occupation during World War II and subsequent Civil War, all of which left the country with a frail political system and a completely wrecked economy. In some ways, the situation then echoes Greece’s security situation today in advance of the September NATO Summit in Wales.

Getting Greece’s House Back in Order: To state the obvious, the focus of Greek security over the last several decades has been Greece’s contentious relationship with Turkey. The two countries have often touched swords to resolve their complex maritime, air, territorial, and boundary disputes in the Aegean Sea. To be sure, Greece has other security concerns which include its rejection of the use of the name “Macedonia” or “Republic of Macedonia” with reference to its neighbor to the north; the flow of illegal immigrants from Albania, the Middle East, and Africa; as well as the usual security issues associated with organized crime in the form of money laundering, smuggling, and the trafficking of illegal drugs and narcotics from the Middle East bound for Europe.

Today, however, these more traditional security issues for Greece must be seen through the prism of the country’s crisis-ridden economy which is burdened by high levels of debt (over 175% of GDP in 2013) and unemployment (currently a record 27 percent overall), as well as a weak central government caught between smaller, more nationalist-oriented parties on both ends of the political spectrum.

Thus, Greece’s top priority must be to place its economy on a sound, economic footing in order to reassure its European Union and NATO partners, and to restore investor confidence. Indeed, Greece’s partners remain concerned about the country’s status in the Eurozone, knowing that the effect of a Greek departure from the euro could seriously undermine its standing with EU/NATO partners.

Energy security is critical to Greece: Russia’s annexation of Crimea and the continuing crisis in Ukraine have presented significant challenges to the Western Alliance. At the same time, however, these also present a potential opportunity for Greece to play a constructive role with its European partners while boosting its own economy. As Western European leaders consider alternative, non-Russian sources of energy to counter previous efforts by Moscow to hold hostage Kiev and points west dependent upon Russian energy supplies, Greece is seeking to develop offshore oil and natural gas plays in the Ionian Sea and south of Crete as a hedge. The developing offshore energy partnership with Israel and Cyprus is another important dimension to Athens’ diplomatic calculus.

As the Ukraine crisis has intensified in recent weeks, NATO’s focus during the upcoming Wales summit will undoubtedly be the implementation of the Alliance’s support measures for its eastern members. One of the key elements of these support measures is the proposal to enhance the capability, training, and readiness of the NATO Response Force (NRF). While Greece may be limited in terms of the number of troops it would be able to contribute to the NRF, with its historic ties to Russia, Greece is positioned to play a supportive role for NATO intelligence activities.

Greece keeping an eye on Turkey and the Middle East: As the political situation evolves in Turkey and instability spread across the Middle East due to the Syrian civil war and the establishment of a self-declared caliphate known as the Islamic State of Iraq and the Levant, or ISIL, Greece must convince its NATO partners that the Alliance ignores the region at its own peril.

Over the past decade, Greek-Turkish relations improved as Ankara sought a more assertive role for Turkey in the Middle East (and generally away from the Aegean issues which previously dogged their bilateral relationship). One of the benefits Greece has recently enjoyed vis-à-vis the Erdogan government has been the reduced role in Turkish politics of the Turkish general staff – one of the traditional sources of tension in their bilateral relationship.

Within the past year, however, Ankara has had to deal with violent domestic protests against those who see the Erdogan government as corrupt and moving too far to embrace Islam and away from the Turkish Republic’s secular roots. Given their close geographic proximity, Turkey’s current vulnerability could pose a challenge for Greece if the situation along Turkey’s southern borders declines further and/or the government in Ankara is replaced by one that reverts back to tension-raising military maneuvers in the Aegean.

With respect to the greater Middle East, Athens must highlight to its NATO partners at the Wales summit the security challenges presented by the ongoing Syrian civil war, the extremist Muslim actions of ISIL, the increasing factionalism in Libya, as well as the Israeli military operations against Hamas in Gaza. As such, Athens’ interest lays in supporting the further development of interoperable and defensive capabilities with Greece’s NATO partners in the Eastern Mediterranean, to include possibly stepping up Operation Active Endeavor and offering access to Greece’s main naval and air bases in support of NATO counter-terrorist, humanitarian, and military missions.

Thus, Greece’s main goal in Wales will be to convince its partners to balance NATO’s priorities between the challenges to stability in the Middle East which more directly affect Greece and its contingency planning to deal with the confrontation over Russia’s intervention in Ukraine.

Overall, major regional security issues are difficult for Greece to address without acknowledging the difficult economic conditions in which the country currently finds itself. Greece is now at a critical juncture and requires the support and understanding of its NATO and EU partners which means first and foremost getting its economy back on a solid footing – potentially through the development of its offshore energy resources. More immediately, the Wales summit provides Greece the chance to offer its more powerful NATO allies access to the Middle East/Levant area should major military operations be required.

Constantine A. Pagedas is Executive Vice President of International Technology and Trade Associates, Inc. (ITTA), a Washington, DC-based consulting company, and editor of the Mediterranean Quarterly: A Journal of Global Affairs.