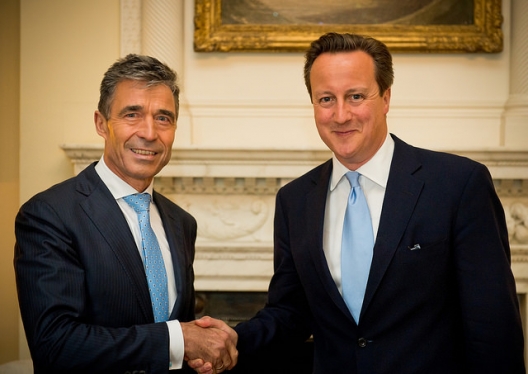 As host of the NATO Wales summit, British Prime Minister David Cameron faces a delicate challenge; strategy or politics? Getting the balance right has been the essential test of David Cameron and his government. By nature far more comfortable in the politics of the moment, Cameron has always found big picture strategy difficult. When he first came to power in 2010, his over-riding ‘strategic’ challenge was to reduce Britain’s burgeoning debt in the wake of the 2008 crash by cutting public expenditure. Now, with an aggressive Russia seeking to unilaterally re-draw Europe’s borders, Cameron is faced with another challenge; leading NATO Europe back to big security.

Britain can only do this if it “leads” by example. That means first and foremost a long-term British commitment to the now totemic 2% of GDP to be spent on defense. With a confirmed defense equipment budget of approximately $270 billion over the next eight or nine years, Britain is on the face of it again stepping up to the burden-sharing challenge. That indeed was the message at the 4 July launch of the first of two British super-carriers, the 65,000 ton HMS Queen Elizabeth. Indeed, with the second carrier HMS Prince of Wales now being assembled and a range of new assets and capabilities confirmed, Britain is again or rather soon will be the most capable of America’s European allies.

Part of the reason for such investment is the end of the ISAF campaign in Afghanistan and the switch of the British armed forces from campaigns to contingency and a more balanced power projection role. Indeed, the need for expeditionary military capability has been reinforced by the July 2014 decision to send 1300 British troops to Poland in the wake of the downing of MH17 and British support support for NATO’s proposed Readiness Action Plan.
Cameron seems also to have finally learnt a painful lesson about the nature of the Special Relationship with the US. Namely, that if Britain cuts its armed forces too savagely, London loses influence in Washington. Cameron cut Britain’s armed forces 8% in the 2010 Strategic Defense and Security Review and paid a commensurate price in Washington.

Cameron has set three priorities for the Summit all of which imply increased forces and resources: full consideration of the implications of the Russia-Ukraine crisis; the “next chapter” in NATO’s relationship with Afghanistan; and the need to properly understand new risks in an unstable world together with how best to support partner nations on the front-line of instability.

Here the challenge Cameron faces in balancing strategy and politics becomes clear. Of late, Cameron has been firm in his rhetoric about the role Britain must play in today’s world and the centrality of NATO to British national strategy and peace in Europe, as well as its role in the wider world.

Equally, there are sound political reasons why David Cameron offered to host the Wales Summit. The symbolism of holding the Summit in Celtic Wales at Celtic Manor on the eve of Celtic Scotland’s September 18 independence referendum is clear. Cameron’s message to Scots is that if they vote to stay in the UK they will remain an integral part of one of the world’s leading security actors and will thus be safer and more secure for it. Cameron also faces a General Election next May and the chance to bestride the world stage appeals to those of a more patriotic bent and he hopes will stop the electoral march of the United Kingdom Independence Party.

However, the real challenge for Cameron will come after the Summit and if he is re-elected Prime Minister. Although the British economy will grow at 3.2% this year, faster than any other state present at the Summit, Britain’s structural national debt is still too high. The political influence of Chancellor of the Exchequer George Osborne is growing precisely because of his sensible stewardship of the Britain’s finances thus far. Osborne is known to be keen on much deeper cuts to public expenditure should the Conservative Party win the next election and the defense budget is again in his sights. The opposition Labor Party has also made it clear that should it win, further cuts will probably need to be made.

In 2010, Cameron had hoped that the strategic landscape would provide him sufficient time to fix Britain’s finances. With that goal in mind, he withdrew British forces from Afghanistan so that he could focus on the economy. Indeed, it was precisely with the need to cut the British defense budget that Cameron appointed accountant Philip Hammond as Secretary of State for Defense.

Interestingly, just before his July move to become Foreign Secretary Hammond said, “Russia’s behavior gives NATO countries a stark reminder that freedom depended upon a willingness to invest in defense. We can’t expect all of that investment to come from the United States.” This marked a shift in policy and suggests that at the Summit Cameron will indeed put strategy before politics…and mean it.

Whether it sticks is another matter. The test will be simple; if Britain commissions HMS Prince of Wales into the Royal Navy, London is serious. If not, politics has indeed come before strategy.