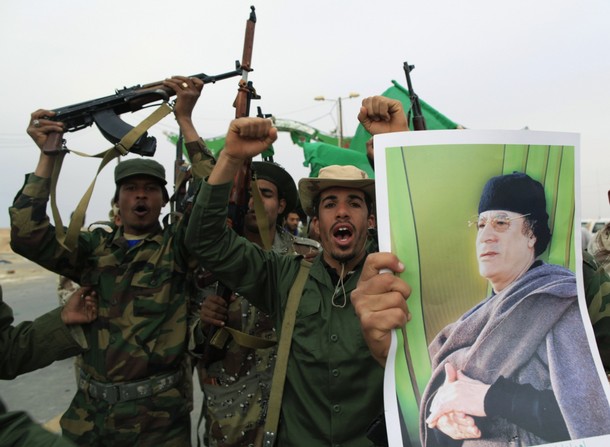 From Mark Landler and Dan Bilefsky, the New York Times:  The prospect of a deadly siege of the rebel stronghold in Benghazi, Libya, has produced a striking shift in tone from the Obama administration , which is now pushing for the United Nations to authorize aerial bombing of Libyan tanks and heavy artillery to try to halt the advance of forces loyal to Col. Muammar el-Qaddafi.

The administration, which remains deeply reluctant to be drawn into an armed conflict in yet another Muslim country, is nevertheless backing a resolution in the Security Council that would give countries a broad range of options for aiding the Libyan rebels, including military steps that go well beyond a no-flight zone.

Administration officials — who have been debating a no-flight zone for weeks — concluded that such a step now would be “too little, too late” for rebels who have been pushed back to Benghazi. That suggests more aggressive measures, which some military analysts have called a no-drive zone, to prevent Colonel Qaddafi from moving tanks and artillery into Benghazi.

The United States is insisting that any military action would have to be carried out by an international coalition, including Libya’s Arab neighbors.

Administration officials contend that a no-flight zone alone would not be effective, in part because they say it could not be set up before April.

Among the other measures being proposed by the United States: sending foreign soldiers to Libya to advise the rebels, or financing them with some of the $32 billion belonging to the Qaddafi regime, which have been frozen by the Treasury Department. Rebels could use the money to buy weapons, officials said.

Neither of these steps, however, would come in time to stave off an assault by Colonel Qaddafi’s forces on Benghazi. …

With the United States already fighting in Iraq and Afghanistan, the administration is fearful of straining an already overstretched military and of being seen as engaged in nation building in the region. “The United States is pretty busy with two wars, and we don’t want a third,” a senior official said.

But Britain, France, and Lebanon were adamant that time was running out. And Libya’s deputy to the United Nations, Ibrahim Dabbashi, who last month broke with the Qaddafi regime, warned that if the international community did not intervene in the next 10 hours, there was a risk of genocide, as bands of mercenaries sent by Mr. Qaddafi attacked the rebel-held city of Ajdabiya.

Privately, some European officials expressed frustration with the Obama administration, with one saying he believed it was supporting strong measures in an attempt to draw a veto.  (photo: Reuters)