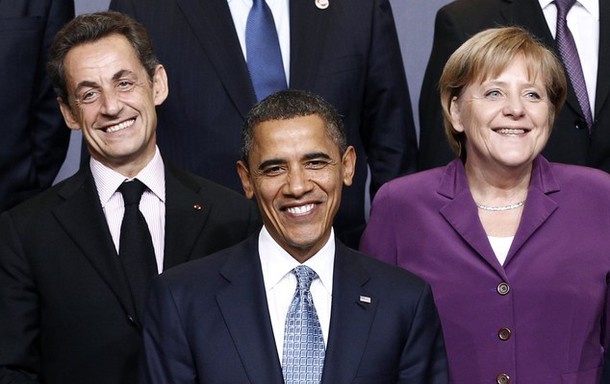 From Constanze Stelzenmüller and Tomas Valasek, the International Herald Tribune:  You might call it the Obama paradox: Atlanticists on both sides of the ocean were certain that this president, inaugurated two years ago, would renew the trans-Atlantic alliance.

Yet two years later, the United States and Europe seem further apart than they have ever been in their policies as much as in public attitudes. For the United States, Europe appears to be less relevant than ever; in Europe, anti-Americanism seems to be drifting into simple indifference.

According to some, this was inevitable: America’s destiny in the 21st century, they say, is to defend its lone superpower status against a rising China. Europe, in this view, is relegated to a minor ally at best; at worst, it becomes a deadweight irrelevance.

We disagree. In a world buffeted violently by the combined impact of globalization, the economic crisis and increasingly assertive non-Western powers, the trans-Atlantic alliance is more important than ever.

The United States remains, of course, the main guardian of global order. But its power, hard and soft, has been eroded by war and economic distress. It needs Europe (and other alliances with like-minded countries) more than before, because it (and they) give it leverage and legitimacy and help it conserve its political resources.

Europe, conversely, is a trade giant which still finds itself — to put it politely — vertically challenged in the political sense. Its enduring desire to be America’s partner in the renewal of global governance is surely worth acknowledging; yet Europe is still too often unable to match its actions to its aspirations. And it needs American power to gain worldwide leverage.

On both sides of the Atlantic, then, there is a tension between goals and capability that ought to draw America and Europe closer together. The alliance needs to be re-calibrated, not abandoned.

Constanze Stelzenmüller is senior trans-Atlantic fellow at the German Marshall Fund of the United States. Tomas Valasek is director of foreign and defense policy at the Center for European Reform.  (photo: Reuters)