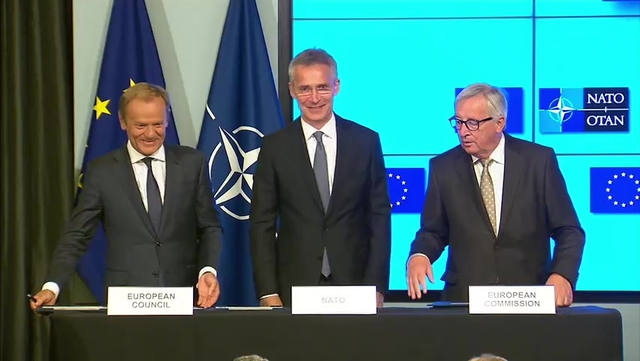 [A] key question remains unanswered: will allied deterrence prevent possible Russian aggression during those 30 days? NATO’s existing forward-deployed forces would not be able to provide protection, especially if Russia seized the Suwałki Gap (on the Poland-Lithuania border) or one of the Baltic states before reinforcements arrived. The Alliance must do more to resolve this “30-day gap….”

But fears about the transatlantic alliance are not an excuse for Europe’s policymakers to float wildly unrealistic proposals, such as a European army independent of NATO.

French President Emmanuel Macron’s idea of “strategic autonomy” seems equally nebulous. Macron recently proposed a European Security and Defense Treaty – a kind of defensive Schengen agreement – and the creation of a European Security Council that would include the UK after it leaves the EU. This concept would establish an alternative structure to NATO and go beyond the EU’s Common Security and Defense Policy, which is just being rebuilt.

Faced with new threats, Europe should use the mechanisms and tools it already has. These have been on the table for a decade, but only in the past three years have policymakers been willing to use them.

For example, in 2017, EU leaders established the Permanent Structured Cooperation (PESCO) to increase defense collaboration among member states, and invoked the EU’s “solidarity clause” at France’s request in the wake of terrorist attacks in that country. Furthermore, the EU signed a declaration of cooperation with NATO last year, and has agreed to create a European Defense Fund. All of these initiatives will strengthen Europe without undermining the Alliance.

Furthermore, the EU can continue to improve its military capabilities without having to create new structures that go beyond its existing legal framework. For starters, European leaders need to decide on the future of the EU Battlegroups, which have been on duty for years but have so far never been deployed. They should also seriously consider expanding the EU’s existing Military Planning and Conduct Capability in order to have a fully-fledged EU Operational Command in place after 2020. The EU has undertaken over 30 military, civilian, and mixed missions, and the bloc plans to be even more active internationally under the recently adopted EU Global Strategy.

All those initiatives within the legal framework of the EU would strengthen Europe without undermining the role of NATO. And this should be our principle for long-term strategy and policy.

Bogdan Klich, Minority Leader of the Polish Senate, was Poland’s defense minister from 2007 to 2011 and a member of the European Parliament from 2004 to 2007.