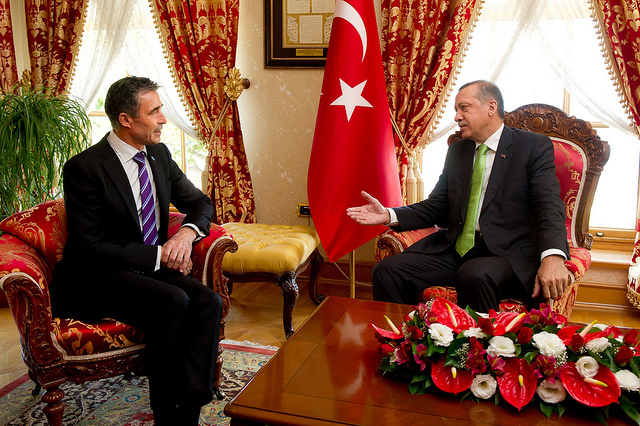 The desire of Turks to join the European Union has cooled considerably over the past decade and public support for NATO in Turkey is the lowest among NATO countries, according to the Transatlantic Trends 2013 public opinion survey released on Wednesday by the German Marshall Fund of the United States (GMF).

The survey also found that an overwhelming majority of Turks want Turkey to stay out of Syria, with only a small minority of 21 percent supporting an intervention in the civil war-torn country.

According to the survey, which measured public opinion in 11 European Union countries, Turkey and the United States, 44 percent of Turkish respondents — compared to 48 percent last year — said that Turkish membership in the EU would be “a good thing.” This is much lower than the 73 percent who favored membership in 2004. Turkish attitudes in this regard have shown fluctuating support in recent years. Support for EU membership declined from 63 percent in 2005 to 40 percent in 2007, then rose to 48 percent in 2009, 2011 and 2012. Thirty-four percent of Turks, up from 29 percent last year and only 9 percent in 2004, said joining the EU would be bad.

Still, Turkey remains more enthusiastic about joining the EU than most EU members states are about accepting Turkey as a member. Twenty percent of European respondents said that Turkey’s EU accession would be good and 33 percent said it would be bad; 37 percent stated that it would be neither good nor bad.

Presenting the survey at a conference on Wednesday, GMF Ankara Director Özgür Ünlühisarcıklı said that the trend of declining support for Turkey’s EU membership bid stems from mutual frustration in fulfilling expectations and fatigue caused by other candidates’ successful accession.

EU Ambassador to Turkey Jean-Maurice Ripert said 44 percent support in Turkey for EU membership is not so bad; rather, it is quite encouraging. He emphasized the economic cooperation and positive relations between the EU and Turkey.

On the question of whether or not NATO membership remains essential for their country’s security, Turkish respondents remained divided with 39 percent saying it is essential and 39 percent saying it is not. Those who still believe in NATO’s importance cited its representation of a community of democracies as the most important reason. As in the past years, Turkey was the NATO member with the lowest public support for the alliance.

An overwhelming majority (70 percent) of those who said that NATO membership is no longer essential also said that Turkey should be able to make its own military decisions. Also among these respondents, 50 percent want to see increased spending on defense — a marked increase of 21 percent since 2012 — compared to 32 percent who want spending in this area to remain at the current level. Only 15 percent of Turkish respondents favor military spending cuts. . . .

The survey also revealed that the Turkish public wants the country to have the freedom to act alone rather than in cooperation with the EU, United States or its regional neighbors on international matters. Thirty-eight percent of Turks think their country should act alone while 21 percent said Turkey should cooperate with the EU on international matters. Relatively few Turks think their nation should cooperate most closely with the United States (9 percent) or Russia (2 percent).