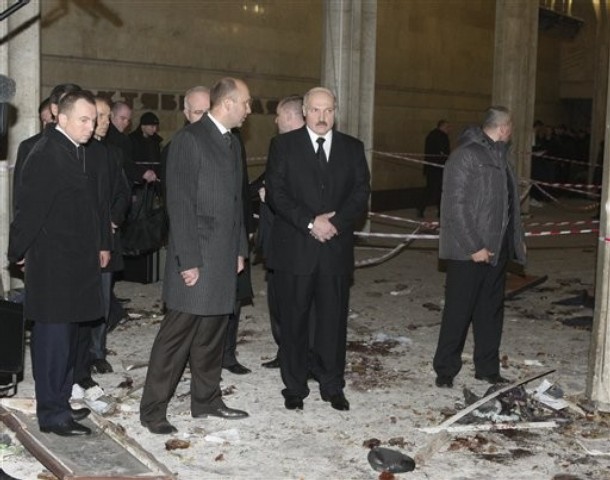 From the AP:  The toll in the Belarus subway bombing rose to 12 dead and more than 200 wounded Tuesday and authorities said several people have been detained in what they are calling a terrorist attack.

The opposition, meanwhile, voiced fears that authoritarian President Alexander Lukashenko would use the attack to launch an increased crackdown on dissent.

Belarus’ domestic security agency, which still goes under its Soviet-era name KGB, said it had identified the likely perpetrator of Monday’s explosion at a busy downtown subway station and was searching for him. It described him as a well-built man in his 20s, but didn’t elaborate.

Interior Minister Anatoly Kuleshov said the bomb apparently was radio-controlled and police had created composite pictures of two male suspects using testimony from witnesses. His office said the bomb, which had been placed under a bench at the Oktyabrskaya station, exploded as people were coming off trains during the evening rush hour. …

There was no claim of responsibility for the blast and police did not identify any possible perpetrators. Lukashenko told officials that "foreign forces" could be behind the explosion, but didn’t elaborate.  (photo: AP)