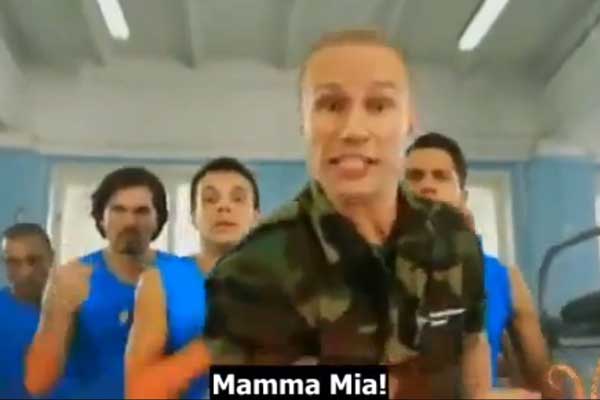 From Richard Milne, Financial Times:  To the music of Abba and a backdrop of toned men and mini skirt-clad women, a Swedish military officer sings: “Mamma Mia! The Russians are coming  . . . They will tear us apart. 7-3! Like in the hockey last year.”

The video, shown on Russian television earlier this year, is, of course, a parody. But the issues it satirises are no longer a laughing matter for Swedes.

On Good Friday, as the country wound down for the Easter weekend, two Russian bombers flanked by four jets swept in close to Sweden on a practice bombing raid. No Swedish jets were scrambled to shadow them – because there was no crew on high alert. Military sources told Svenska Dagbladet, the only newspaper in the country still to have a defence correspondent, that the Russians had simulated an attack on Stockholm and a target in southern Sweden.

The news – and subsequent reports that a Russian spy plane had flown provocatively close to Swedish airspace – has heightened an already intense debate in the Nordic country about its defence capabilities. A recent opinion poll suggested just 6 per cent of Swedes trust the country’s ability to defend itself. . . .

Sverker Göranson, commander-in-chief of Sweden’s armed forces, said last year the country could only defend itself against a limited attack for “about a week on our own”. Karin Enström, defence minister, responded that this was “enough” given the current threats to Sweden. . . .

The plane incursions stir unfortunate memories in Sweden, which was on high alert in the 1980s after a number of scares involving Soviet submarines. In 1981, a Soviet submarine ran aground near the southern Swedish town of Karlskrona, and in the following years the Swedish navy chased off several submarines, including with depth charges. . . .

Unlike several of its Nordic and Baltic neighbours, Sweden – as well as Finland – has chosen not to join Nato. And Nato, while praising its partnership with Sweden, has made clear that it cannot guarantee it will help out the country if it comes under attack. “You cannot stand outside Nato but still want everything it offers,” Anders Fogh Rasmussen, Nato’s secretary-general, said in Sweden earlier this year.

Some politicians, including inside the government, have raised the question of Nato membership again, even though formally the issue is off the table at least until elections next year. Allan Widman, defence spokesman at the junior coalition Liberal party, says Sweden is essentially dependent on the Alliance in any case, so should consider joining up.  (photo: russiaslam)