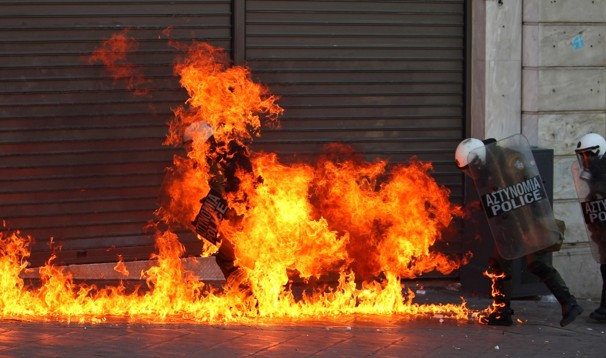 From Valentina Pop, EUobserver:  The Swiss army is preparing for possible internal civil unrest as well as waves of refugees from euro-countries as the economic crisis drags on.

Switzerland, a non-EU, non-euro country landlocked between eurozone states, last month launched a military exercise to test its preparedness to deal with refugees and civil unrest.

“It’s not excluded that the consequences of the financial crisis in Switzerland can lead to protests and violence,” a spokesperson of the Swiss defence ministry told CNBC on Monday. “The army must be ready when the police in such cases requests for subsidiary help.”

Some 2,000 officers took part in the "Stabilo Due" military exercise in eight towns around the country, based on a risk map detailing the threat of internal unrest between warring factions and the possibility of refugees from Greece, Spain, France, Italy and Portugal, according to Swiss media reports.

Swiss defence minister Uli Maurer recently told Schweizer Soldat magazine that there may be an escalation of violence in Europe. "I can’t exclude that in the coming years we may need the army," he said.