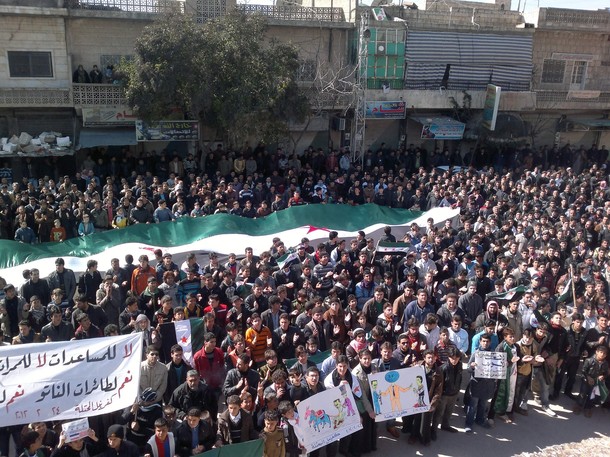 From Borzou Daragahi, the Financial Times:  Bassima Kadma [an official of the Syrian National Council] said rebels were receiving military-grade communications equipment, bulletproof vests, night-vision goggles and medical gear with the help of international allies. Western officials said they were also considering providing the rebels, operating under the banner of the Free Syrian Army, with intelligence as well as sources of funding.

“It has begun,” Ms Kadma said of international material support for rebels, though she would not disclose which countries were helping. “It’s coming up clearly that there is a consensus of support for the Free Syrian Army.”

Opponents of Mr Assad have increasingly turned to armed revolt . Close observers of the unrest unfolding in the country have detected the use of anti-tank rockets by the rebels but concluded that they were obtained by pilfering Syrian military storehouses. A black market in weapons has begun to thrive.

Weapons from abroad, including light munitions and anti-tank guns, are getting to rebels in Homs, Hama, Idlib, Deir Ezzour and the outskirts of Damascus with the help of arms dealers and political activists, said Anas Abdah of the SNC.

“We believe the FSA is an essential element of the Syrian uprising,” he said. “We believe there is a political will in many capitals in the world to help and train the FSA. At this moment of time there is no official support from any Arab or western government. But we are seeing some encouraging signs. . . .”

While they acknowledged that supplies were getting to the rebels from the west, they denied that their governments were supplying them. Many diplomats and Syrian opposition activists said Qatar and Saudi Arabia were taking the lead in efforts to equip the rebels.

What help is coming from the west is unofficial.

“There are a lot of expatriate Syrians who are based in European countries who are providing help to people on the ground,” a western diplomat said. “They’re providing things like body armour or satellite phones. It’s western sources but not western governments. It’s not organised.”  (photo: Reuters)