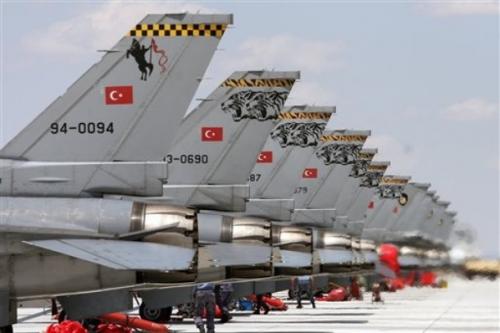 From Adrian Blomfield, the Telegraph:  While the exact circumstances surrounding the aircraft’s disappearance remained far from clear, any indication that it was brought down by Syrian fire could have major international repercussions.

As a member of Nato since 1952, Turkey could call on the alliance to support and perhaps even participate in any response it chooses to make.

It would almost certainly invoke Chapter IV of the Nato treaty, which allows a member to convene an emergency summit of the whole alliance if "the territorial integrity, political independence or security of any of the parties is threatened".

Turkey reportedly came close to invoking Chapter IV in April after Syrian forces opened fire into its territory, wounding two Turkish nationals and two Syrians at a refugee camp close to the border. It was persuaded not to by the United States. . . .

Turkey has been at the forefront of regional efforts to oust Mr Assad and has given sanctuary to rebels seeking his overthrow. With thousands of refugees pouring across its borders, it also led calls to impose a buffer zone inside Syrian territory but was rebuffed by Western powers.

Instead, Turkey has become a key conduit for the passage of Saudi and Qatari weapons to the Syrian rebels.

Officials in Ankara have expressed unease that this policy would leave the country vulnerable to Syrian retaliation and some will see yesterday’s incident as evidence that their fears have been realised.

The United States gave Turkey strong assurances that it would not leave the country "hung out to dry" should it experience a backlash from Syria, a Western official in Washington told The Daily Telegraph last week.

The Obama administration could now come under strong pressure to deliver on its pledge, despite a deep reluctance in the West to become involved in any military action in Syria.  (photo: AP)