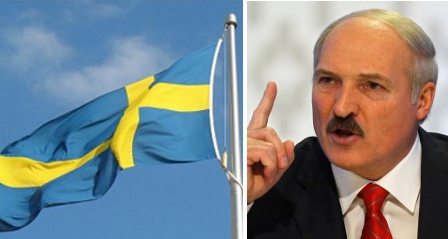 From Camille Bas-Wohlert, AFP:  Sweden’s ties with Belarus soured further Wednesday as Minsk expelled all Swedish diplomats and closed its mission in Stockholm, five days after the ex-Soviet state expelled the Swedish ambassador.

"There will be an emergency meeting of the European Union ambassadors Friday to decide on appropriate measures," the source said on condition of anonymity, adding that the meeting would be held in Brussels.

Bildt last week said ambassador Stefan Eriksson, who took up the post in Minsk in 2008, was expelled because of his pro-rights stance and meetings he had with the Belarus opposition.

Stockholm retaliated immediately, saying it would not welcome a new ambassador named by Minsk to replace an envoy who left the post several weeks ago, and withdrew residency permits for two Belarus diplomats who were asked to leave the Scandinavian country. . . .

Lukashenko dismissed the country’s top border control official and the top air force commander after the incident orchestrated by a Swedish advertising firm.

Bildt conceded the expulsion could be linked to the widely-reported teddy-bear incident and called it "scandalous."

From Reuters:  Belarus said on Wednesday it was withdrawing its remaining embassy staff from Sweden over a pro-democracy stunt involving an air drop of teddy bears on its territory and gave Sweden until the end of the month to pull its diplomats out of Minsk.

Though a foreign ministry statement said Belarus was not severing relations with the Nordic country, the move marked an escalation in the dispute and looked certain to worsen the already strained ties with the European Union.

Belarus expelled Sweden’s ambassador on August 3 following the July 4 escapade in which about 800 toy bears bearing pro-democracy messages were parachuted into the hardline former Soviet republic from a light aircraft chartered by a Swedish public relations firm. . . .

The foreign ministry said Minsk was pulling out its remaining embassy staff because Sweden had aggravated the situation by expelling two more diplomats and had refused to allow a new Belarussian ambassador to take up his post.

"In this connection, the Belarussian side has been forced to take the decision to withdraw its embassy in Sweden and bring back all its (embassy) staff to Belarus," the statement said.  (photo: thelocal.se)