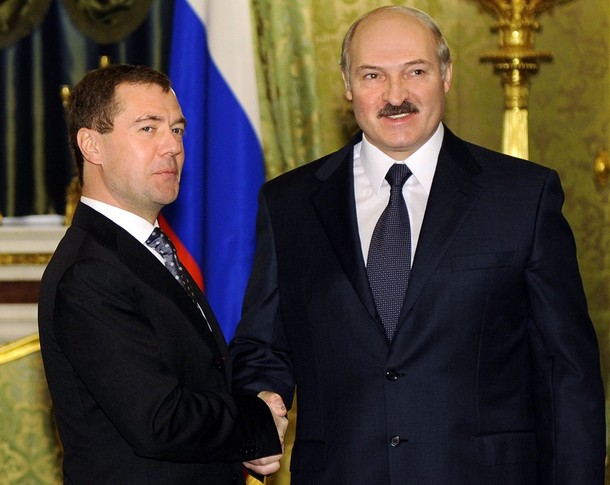 From Stuart Williams, AFP:  The Kremlin on Saturday accused the strongman president of Belarus of dishonourable and inconsistent behaviour, in one of the most venomous clashes yet between Russia and its one-time obedient ally.

Belarussian President Alexander Lukashenko, for years a loyal servant of Moscow, accused his Russian counterpart Dmitry Medvedev of distorting remarks he made about the recognition of Georgian breakaway regions.

The Kremlin reacted furiously with a scathing personal attack on Lukashenko and threatened to publish a full transcript of an official meeting to back up its case.

"It is to him that this description perfectly applies," he added.

The row has erupted over whether Lukashenko — known at home as ‘Batka’ or ‘Dad’ — promised to recognise the breakaway pro-Moscow Georgian regions of South Ossetia and Abkhazia as independent. …

In a veiled threat, he [Prikhodko] added: "We can also publish other remarks of Alexander Lukashenko which would not be uninteresting for both Belarussian and international society."

A source within the Kremlin administration took the attack a step further: "The dishonour and inconsistency of Alexander Lukashenko on this question (of Abkhazia and South Ossetia), and on many others, became the norm long ago."  (photo: Reuters)