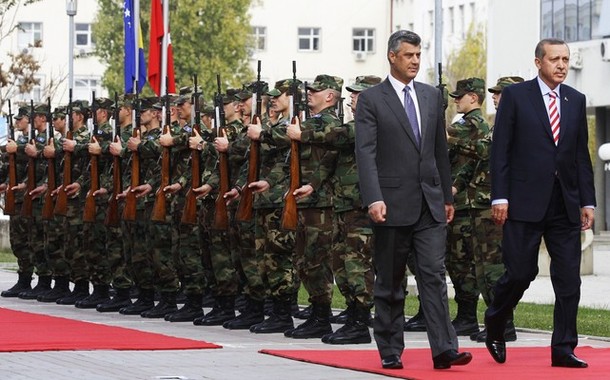 From Zaman:  The Turkish prime minister encouraged Kosovo’s independence from Serbia, telling Kosovar authorities in 2008 that they should not delay declaring independence , Kosovo’s outgoing Prime Minister Hashim Thaci has said.

“Ten days before our independence, Prime Minister [Recep Tayyip] Erdoğan advised us to declare our independence without delay,” Thaci told a crowd of 3,000 people who gathered to welcome Erdoğan in the city of Prizren on Wednesday evening. Thaci, who called Erdoğan “Kosovo’s hero,” said Erdoğan’s advice meant support for independence and encouraged Kosovar authorities to go on with independence plans.

Kosovo declared independence from Serbia in February 2008. Turkey became one of the first countries to recognize Kosovo as an independent state, drawing angry protests from Serbia. But relations have improved with Serbia since then and Erdoğan, who paid a two-day visit to Kosovo, said after talks with Thaci on Wednesday that Turkey was willing to act as a mediator between Kosovo and Serbia.  (photo: Reuters)