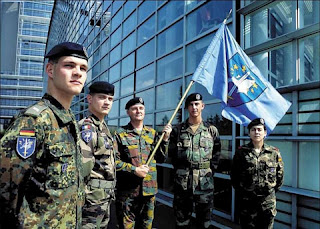 From Marcel Dickow, Hilmar Linnenkamp, and Christian Mölling, Stiftung Wissenschaft und Politik:  What the EU needs now is a broad assess-ment of the existing national capabilities with regard to their potential for the cre-ation of joint European capabilities – the European Defence Review (EDR).

For this task, an independent commission of high-level experts from the security policy community should be established through a decision of the EU Council, and its members should be appointed by the High Representative for Foreign Affairs and Security Policy (HR, who should not be part of the commission herself). It is important that the EDR Commission be given its own Secretariat and be supported by the EDA. The commitments of the EU Member States to cooperation would already be formu-lated in the Council decision. The European Commission and the European Parliament should each participate by sending one representative, who would not be subject to directives from their hierarchies. The High Representative would appoint at her own discretion the other members of the commission, consisting of ten or at most twelve members in total, with a preference for politicians rather than experts, gener-alists rather than generals. As proposed recently by Nick Witney, founding director of the EDA, the heads of government of the Weimar Triangle countries could press for an initiative of this kind within the EU.

The aim of the independent commission should be to submit a European Defence Review to the European Council, via the High Representative, within a period of twelve months. It should consist of two parts: an overall assessment of the national potentials relevant to common capabilities, and proposals for coordinated national armed forces planning aimed at developing the joint military capabilities of the EU. To this end, the EDR commission would have to analyse the strengths and weaknesses of the individual countries’ military forces. Its primary task would thus be to identify existing redundancies and shortages – the individual EU Members have too much of some equipment (frigates, helicopters, fighter aircraft), but Europe has too little of others, including important joint capa-bilities (reconnaissance, communication, logistics). The commission should also iden-tify where it would make sense to create complementarities and where excess capac-ities could be reduced.

The methodology of the Ghent initiative (categorising capabilities) can be extended further from a European perspective, apply-ing to:

* first, capabilities that can only be created through the joint efforts of several or many EU Member States and are thus genuinely European;

* second, capabilities that are contributed by individual states or groups of states out of their national military resources for deployment in (national and) Euro-pean operations;

* third, capabilities that Member States possess for use in their own interests and that remain outside the sphere of Euro-pean plans and objectives.

The independent commission – a new opportunity

Although it would actually make a great deal of sense for the EDA to conduct a European Defence Review, the EU Member States have not granted it this role. The independent commission proposed here thus remains the only encouraging alter-native. Its essential characteristics would be decisive in determining its chances of actually being used and of producing suc-cessful results. Most importantly, it should provide the EU Member States with advantages that they cannot gain on their own.