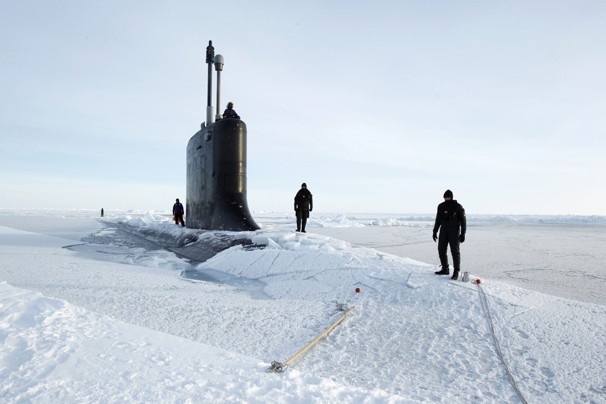 The Arctic region — covering more than 30 million square kilometers and stretching around the territorial borders of Canada, Denmark (via Greenland), Norway, Russia and the United States by way of the Alaskan coastline — is transforming before our eyes. And not just because the ice is melting. It’s increasingly the site of military posturing, and the United States isn’t keeping up with the rest of the world.

In 2009, Norway moved its operational command to its northern territories above the Arctic Circle. Russia has plans to establish a brigade that is specially equipped and prepared for military warfare in Arctic conditions. Denmark has made it a strategic priority to form an Arctic Command. Canada is set to revitalize its Arctic fleet, including spending $33 billion to build 28 vessels over the next 30 years. Even China has entered the Arctic race; it constructed the world’s largest non-nuclear icebreaker to conduct scientific research in the Arctic.

September marked the lowest recorded levels of sea ice in the Northern Polar Region. The polar ice cap today is 40 percent smaller than it was in 1979, and in the summer of 2007 alone, 1 million more square miles of ice beyond the average melted, uncovering an area of open water six times the size of California. As quickly as the polar ice cap recedes, commercial opportunities in the resource-rich Arctic advance. The Arctic is governed by the U.N. convention on the Law of the Sea. That framework allows a coastal state to have exclusive economic control 200 miles off its coast — and possibly to extend authority 600 miles beyond, depending on certain scientific claims.

In the 21st-century Arctic, large corporations and countries are racing to reach and capture the abundance of offshore oil and gas as well as iron ore, nickel, cooper, palladium and rare-earth minerals. The U.S. Energy Information Administration estimates that the Arctic contains 13 percent of the world’s undiscovered oil resources and 30 percent of its gas resources. And as the ice melts, cargo transport could increase from the 111,000 tons in 2010 to more than 1 million tons in 2012, according to some Russian estimates. . . .

But the U.S. strategies and policy statements about the Arctic are poor substitutes for action in the Arctic. And that’s where the United States falls flat. The Coast Guard has no operating bases or stations above the Arctic Circle in Alaska. That means that any search-and-rescue or maritime deployment in the U.S. Arctic Sea is delayed by at least eight hours by air and days by sea. Today, the United States has only one medium-duty operational icebreaker in commission, the Coast Guard Cutter Healy. The Coast Guard’s entire inventory of such vessels includes two heavy icebreakers, Polar Sea and Polar Star, both of which are not operational. The future of this fleet is in Congress’s hands, where the House and Senate are wrangling over funding decisions. . . .

Five years ago, Russia fired cruise missiles over the Arctic in a summer military exercise, resumed surface naval patrols in Arctic waters in 2008, reinforced its strategic nuclear forces in the North, and is currently building eight ballistic missile submarines planned to be completed by 2015. Last year, two Russian strategic bombers carried out a routine patrol mission over the Arctic and Atlantic oceans and were shadowed by a large number of NATO jet fighters, the first time in recent memory that such a large NATO response occurred.

Heather A. Conley is the director of the Europe program at the Center for Strategic and International Studies and a former deputy assistant secretary of state. She is the author of “A New Security Architecture for the Arctic: An American Perspective,” forthcoming from CSIS.   (photo: Lucas Jackson/Reuters)