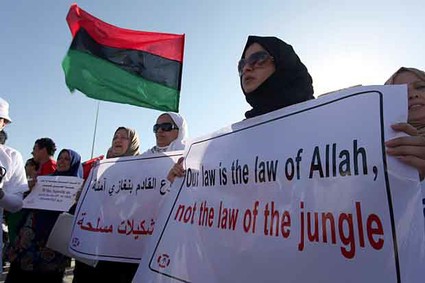 From Karim Mezran and Eric Knecht, U.S. News & World Report:  Over the past few weeks, a series of developments in Libya suggests that the country may be reaching a turning point in its protracted security crisis. Although various leaders have vehemently and repeatedly called for disbanding rebel militias for much of the last year, the Libyan people and its government have lately come together—and not without some unfortunate violence—to strip rogue militias of their legitimacy and jumpstart the building of a credible national army and police force. The process is far from completed, and the Libyan government is in dire need of assistance, but the latest developments offer some encouragement. . . .

Ways to move beyond stopgap measures that rely on neither militia nor tribal affiliation has been a matter of debate since the earliest days of the country’s transition. More recently, some have proposed rebuilding national security forces from scratch, in part because existing ones have been at least partially infiltrated by members of Salafist groups and other extremists. If these forces were to be rebuilt, a useful model for a new armed corps might be the French Gendarmerie or the Italian Carabinieri, both of which have performed very well in guaranteeing order and stability in their countries and elsewhere.

Regardless of the model used, however, it is clear the Libyan government should ask for international support in training and arming its forces. Assistance from outside—which is overwhelmingly popular among the Libyan people—will guarantee the stability needed to engage in infrastructure construction and development projects. These initiatives are sorely needed to provide jobs and training programs for thousands of restless, unemployed, and frustrated young people who currently fill the ranks of the militias. In this way, disbanding militias is crucial to the economic development that will, in turn, guarantee that militias remain disbanded.

Over the last few weeks the long and seemingly intractable struggle to disband militias has shown signs of letting up. The international community should recognize this as a potential turning point and offer whatever assistance the Libyan government needs. Leaving Libya to suffer its fate alone not only endangers the future of this nascent democracy and thousands of Libyans, but will have consequences far beyond its borders that we can no longer afford to ignore.