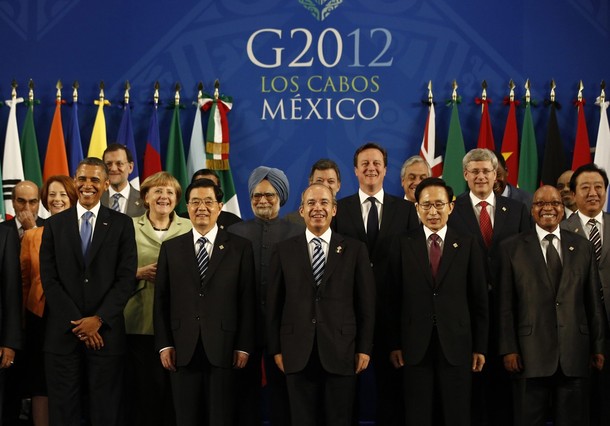 From David Rothkopf, Foreign Policy:  One reason today’s seeming global power void is so frustrating is that we actually live at or near the moment of the world’s greatest aggregate wealth, a time when more nations possess more engines and instruments of real power than ever before.

Our problem is not that the biggest powers are incapable of action to address current problems. It’s that just when the promise of a new post-Cold War, post-single-superpower era of collaboration among nations seemed to be greatest, many of the big powers have revealed themselves to be unwilling to assume the responsibilities of true global leadership — of motivating, cajoling, inspiring, intimidating, confronting or blocking actions by other powers. It’s not so much that we are in a G-Zero world as it is that most of our leaders are zeroes. . . .

Obama has engaged with virtually all of these situations to little effect, offering much rhetoric but not much shoulder. He may well be appropriately focused on economic issues at home, but there is no denying that at the G-20, in the UN, at the world’s international financial institutions, and confronting key challenges, no one is touting the transformational presence of Obama the multilateralist as they did a couple of years ago. . . .

Similarly, whether it is the failure to stop Iran’s nuclear march or the failure to stop Assad in Syria or the inability of the World Bank to stabilize economies and help create jobs, or whether it is the inevitable recognition that our planet actually demands cooperation among all nations to preserve its climate, I continue to believe that circumstances will be more effective than our current weak crowd of leaders at persuading the world that we need the strong global governance that seemed closer two years ago than it does today.

In other words, it will get worse before it gets better. What we are seeing today is the kind of failure of leadership likely to produce consequences so disturbing that ultimately they will help move us past the multilateral rhetoric of idealists to the urgency that comes of clear-eyed realism about what works, what doesn’t, and what we really need.  Multilateralism will ultimately flourish not because it is more equitable but because we cannot solve global problems without it. Today’s leaders — through their inaction and missteps — may inadvertently be doing more to ensure cooperation among their successors than they did when they actually seemed to care about such issues earlier in their careers.

David Rothkopf, CEO and editor at large of Foreign Policy, is author of Power, Inc.: The Epic Rivalry Between Big Business and Government — and the Reckoning That Lies Ahead.  (photo: Reuters)