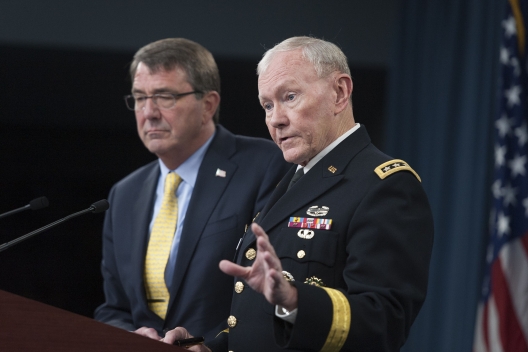 Today’s global security environment is the most unpredictable I have seen in 40 years of service. Since the last National Military Strategy was published in 2011, global disorder has significantly increased while some of our comparative military advantage has begun to erode. We now face multiple, simultaneous security challenges from traditional state actors and transregional networks of sub-state groups – all taking advantage of rapid technological change. Future conflicts will come more rapidly, last longer, and take place on a much more technically challenging battlefield. They will have increasing implications to the U.S. homeland.

This National Military Strategy describes how we will employ our military forces to protect and advance our national interests. We must be able to rapidly adapt to new threats while maintaining comparative advantage over traditional ones. Success will increasingly depend on how well our military instrument can support the other instruments of power and enable our network of allies and partners. The 2015 NMS continues the call for greater agility, innovation, and integration. It reinforces the need for the U.S. military to remain globally engaged to shape the security environment and to preserve our network of alliances. It echoes previous documents in noting the imperative within our profession to develop leaders of competence, character, and consequence.

Excerpts from foreword by Chairmain of the Joint Chiefs of Staff General Martin Dempsey.

Most states today — led by the United States, its allies, and partners — support the established institutions and processes dedicated to preventing conflict, respecting sovereignty, and furthering human rights. Some states, however, are attempting to revise key aspects of the international order and are acting in a manner that threatens our national security interests. While Russia has contributed in select security areas, such as counternarcotics and counterterrorism, it also has repeatedly demonstrated that it does not respect the sovereignty of its neighbors and it is willing to use force to achieve its goals. Russia’s military actions are undermining regional security directly and through proxy forces. These actions violate numerous agreements that Russia has signed in which it committed to act in accordance with international norms, including the UN Charter, Helsinki Accords, Russia-NATO Founding Act, Budapest Memorandum, and the Intermediate Range Nuclear Forces Treaty….

We support China’s rise and encourage it to become a partner for greater international security. However, China’s actions are adding tension to the Asia-Pacific region. For example, its claims to nearly the entire South China Sea are inconsistent with international law. The international community continues to call on China to settle such issues cooperatively and without coercion. China has responded with aggressive land reclamation efforts that will allow it to position military forces astride vital international sea lanes….

Concurrent with state challenges, violent extremist organizations (VEOs) — led by al Qaida and the self-proclaimed Islamic State of Iraq and the Levant (ISIL) — are working to undermine transregional security, especially in the Middle East and North Africa. Such groups are dedicated to radicalizing populations, spreading violence, and leveraging terror to impose their visions of societal organization. They are strongest where governments are weakest, exploiting people trapped in fragile or failed states. In many locations, VEOs coexist with transnational criminal organizations, where they conduct illicit trade and spread corruption, further undermining security and stability. In this complex strategic security environment, the U.S. military does not have the luxury of focusing on one challenge to the exclusion of others. It must provide a full range of military options for addressing both revisionist states and VEOs. Failure to do so will result in greater risk to our country and the international order….

America’s global network of allies and partners is a unique strength that provides the foundation for international security and stability. These partnerships also facilitate the growth of prosperity around the world, from which all nations benefit.

As we look to the future, the U.S. military and its allies and partners will continue to protect and promote shared interests. We will preserve our alliances, expand partnerships, maintain a global stabilizing presence, and conduct training, exercises, security cooperation activities, and military-to-military engagement. Such activities increase the capabilities and capacity of partners, thereby enhancing our collective ability to deter aggression and defeat extremists….

In Europe, we remain steadfast in our commitment to our NATO allies. NATO provides vital collective security guarantees and is strategically important for deterring conflict, particularly in light of recent Russian aggression on its periphery. U.S. Operation ATLANTIC RESOLVE, our European Reassurance Initiative, NATO’s Readiness Action Plan, and the many activities, exercises, and investments contained in them serve to underline our dedication to alliance solidarity, unity, and security. We also will continue to support our NATO partners to increase their interoperability with U.S. forces and to provide for their own defense….

Combined training and exercises increase the readiness of our allies and partners while enhancing the interoperability and responsiveness of U.S. forces. With advanced partners like NATO, Australia, Japan, and Korea, our exercises emphasize sophisticated capabilities such as assuring access to contested environments and deterring and responding to hybrid conflicts. With other partners, training often focuses on improving skills in counterterrorism, peacekeeping, disaster relief, support to law enforcement, and search and rescue. Security cooperation activities are at the heart of our efforts to provide a stabilizing presence in forward theaters. These build relationships that serve mutual security interests. They also develop partner military capabilities for self-defense and support to multinational operations. Through such activities, we coordinate with other U.S. agencies and mission partners to build cultural awareness and affirm relationships that increase regional stability.

Excerpts from the National Military Strategy of the United States of America 2015.