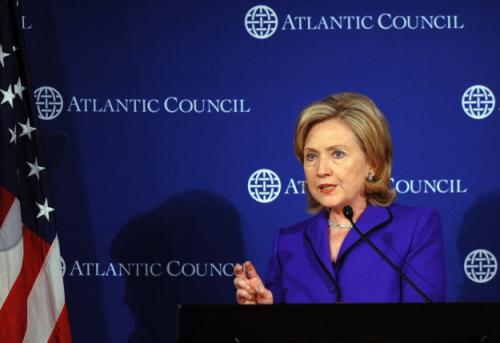 From the Heritage Foundation: However, there are two elements of the Administration’s vision for NATO’s future which are particularly worrisome. Secretary Clinton once again stated the Administration’s support for a separate EU defense policy and for the Lisbon Treaty. The EU’s existing defense policy has provided NATO with little or no valuable complementarity, and serious questions remain about the EU’s motivation in pursuing a military identity. NATO’s primacy in the transatlantic security alliance must remain supreme and the Administration should make this a central element of NATO’s Strategic Concept.

Secondly, neither Ambassador Daalder nor Secretary Clinton gave a clear answer on the question of whether U.S. nuclear weapons will remain in Europe. Ambassador Daalder is a well-known arms control enthusiast, absolutely committed to President Obama’s vision of a nuclear-weapons-free world. It is rumored that Daalder wants to see U.S. nuclear weapons removed from Europe in their entirety. However, a withdrawal of America’s nuclear arsenal from Europe at this time would send the message that the transatlantic alliance no longer matters. It would be premature and profoundly destabilizing, inviting the worst kinds of provocation from regimes such as Iran.  (photo: Jewel Samad, AFP/Getty)