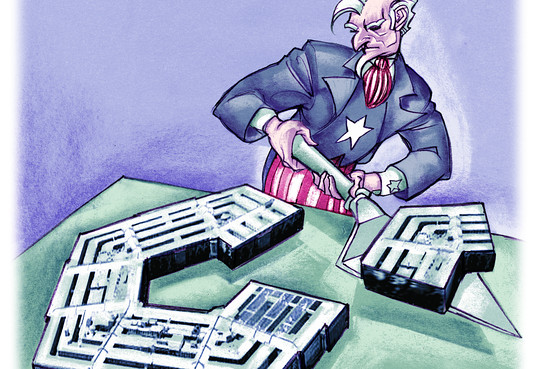 From Donald Rumsfeld, the Wall Street Journal:  Today Leon Panetta will take the oath to become our nation’s 23rd secretary of defense. After he walks through the Pentagon’s river entrance and up the oak-paneled stairwell to his office, the weight of managing a three million-person department during wartime will sink in. And Mr. Panetta’s tenure begins just as President Obama and bipartisan majorities in Congress are insisting on deep cuts to defense spending. It will be tempting to accede to the White House’s proposal to carve out $400 billion, if not more, from the national security budget by 2023. It would also be a grievous mistake. . . .

To be sure, there are savings to be found in the defense budget. Mr. Panetta might start by opposing any and all congressional earmarks, past and future. More than $80 billion in unnecessary spending for pet projects has been shoved down the Pentagon’s throat over the last decade.

Mr. Panetta should also reinvigorate the effort to reposition our forces away from unnecessary Cold War defensive garrisons to smaller, forward bases. Until 2005, for example, America was paying $225 million annually to station aircraft in Iceland to monitor threatening Soviet bombers and submarines that hadn’t been around for over a decade. The Bush administration initiated a number of repositioning initiatives in Asia and Europe that have since flagged. The longer we provide a security blanket courtesy of the U.S. taxpayer, the longer we delay the day when European and other allies begin serious investments in their own defense capabilities. . . .

The U.S. taxpayer is also subsidizing a bloated and broken personnel system for nearly 800,000 Defense Department civilians. Since 9/11, the number of active duty military has increased 4%, while the number of civilians has increased nearly 50%. More recently, the Pentagon decided to increase its acquisition corps to 30,000 from 20,000 civilians. The last thing the nation needs are new and expensive bureaucrats managing fewer programs. The Obama administration should consider a commitment to reduce the DoD civilian work force by 10% through attrition. . . .

Our country has taken an ax to our national security budget—both the Defense Department and the intelligence community—after every war of the 20th century. And every time we later regretted it. . . .

Defense spending is now 19% of federal outlays and declining. This is the lowest percentage since before World War II. At 4.7% of GDP, the defense budget is dwarfed by the cost of Social Security, Medicare and Medicaid, which exceed 10% of GDP. Even if President Obama tomorrow brought home each and every troop in Iraq and Afghanistan, tore down the Pentagon, shuttered the CIA and the national security agencies of government, and pink-slipped the three million men and women defending the country, it would not solve America’s financial woes.