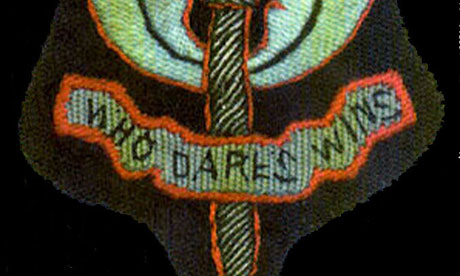 From Mark Urban, the BBC:  At a meeting near the end of March, we have been told, authorisation was given to take certain steps to develop the [Libyan opposition’s National Transition Council] NTC’s embryonic ground forces. This involved the immediate dispatch of a small advisory team, and the longer-term development of a "train and equip" project. Ministers were advised, say those familiar with the discussion, that this second part of the plan would take at least three months to implement.

When half a dozen British officers arrived at a seaside hotel in Benghazi at the beginning of April, they were unarmed and their role was strictly limited. They had been told to help the NTC set up a nascent defence ministry, located in a commandeered factory on the outskirts of the city. . . .

[T]he accidental bombing of NTC columns by Nato aircraft in early April provided those who wanted more direct assistance with a powerful argument. British and French officers on the ground were permitted to co-ordinate more closely with the NTC for the purposes of "deconfliction" or preventing such accidental clashes from happening again.

Under the deconfliction rubric, British advisers made their way to places like Misrata, then under siege, where the RAF was focusing its air strikes. The stage was set then for months of bombing which, as it progressed, both exhausted the stocks of precision weapons available to some Nato allies and the patience of many politicians for what was going on. Insiders say that, discreetly, they were soon doing more than deconfliction, actually co-ordinating certain Nato air attacks.

Taking as his cue the March approval in principal for a training programme, [Chief of the Defence Staff General Sir David] Richards had started a series of low profile visits to Doha, the capital of Qatar.

This Gulf emirate had taken a leading role in backing the NTC, and its defence chief was by June brokering an agreement with the UK and France to provide material back-up as well as training for the NTC. . . .

France was to prove more forward-leaning than the UK in this, and by August was providing weapons to NTC units in the Nefusa mountains of western Libya. The UK, meanwhile, had agreed to focus its efforts in the east of the country. It was as part of this new effort that British special forces returned to Libya.

Although plenty of people in Whitehall still remembered the March debacle, it was agreed to allow a limited number of British advisers to take a direct part in training and mentoring NTC units in Libya. Sources say the number of men sent from D Squadron of 22 SAS Regiment was capped at 24. They were performing their mission by late August.

While France and Qatar were ready to provide weapons directly, the UK was not. However, this made little practical difference since the SAS was operating closely with Qatar special forces who had reportedly delivered items such as Milan anti-tank missiles. . . .

[A]s the revolutionaries fought their way into Gaddafi’s home town of Sirte, they were assisted by a handful of British and other special forces. Members of the Jordanian and United Arab Emirates armies had fallen in behind the Qataris too.

When, on 20 October, Gaddafi was finally captured and then killed by NTC men, it followed Nato air strikes on a convoy of vehicles carrying leading members of the former regime as they tried to escape from Sirte early in the morning. Had British soldiers on the ground had a hand in this? Nobody will say yet.  (photo: PA/Guardian)  (via Real Clear World)