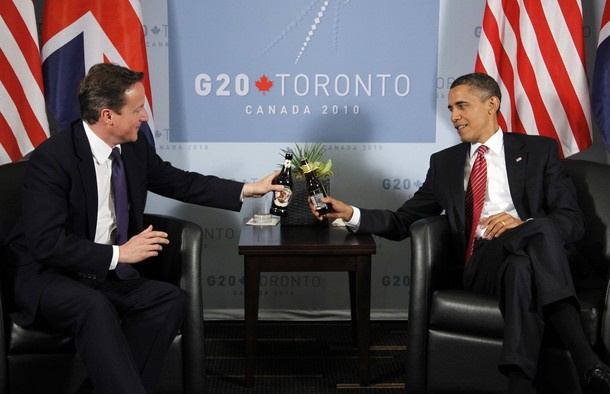 From Con Coughlin, the Wall Street Journal:  The radical reappraisal of British foreign policy undertaken by Prime Minister David Cameron‘s new coalition government has raised serious questions about the future of Britain’s historic alliance with Washington.. It has also provoked deep divisions among senior ministers over how long British troops will remain committed to combat operations in Afghanistan …

Many senior ministers—including Mr. Cameron—have been appalled at the way Mr. Obama has lashed out at BP—a company only the president insists on publicly referring to as British Petroleum—over the catastrophic oil spill in the Gulf of Mexico. One senior Conservative politician told me he thought the language used by Mr. Obama against BP was "gratuitous," and was indicative of the president’s "hostile" attitude towards British interests. …

"There is a growing awareness that we are dealing with a weak American president who is failing to demonstrate effective leadership on a whole range of issues," one of Mr. Cameron’s senior international security advisers told me. "On Iran, on Afghanistan, on Israel and the Palestinians, the perception is growing that there is a dangerous lack of leadership coming from the White House. …"

Important divisions have also emerged within the Conservative leadership, which is the coalition’s dominant party. Since taking office two months ago, both Mr. Cameron and Mr. Hague have spoken of their desire for British combat troops to be withdrawn within five years. In a BBC radio interview last month, Mr. Cameron hinted that British troops could withdraw even if the Americans stayed. "This mission must not go on forever," he said. "I’m there for our national interest. This is not about staying in with the Americans."

But this approach has been contradicted by Liam Fox, Britain’s hawkish defense secretary, who dampened down speculation about an early British withdrawal during a visit to Washington last week, when he insisted that British troops would be among the last international forces to leave southern Afghanistan.

And even if British forces do remain in Afghanistan for the duration of the mission, there is a steely resolve within the new government to avoid future involvement in overseas military campaigns, even if it risks strained relations with Washington.

"The era when we dispatch a large military presence overseas as part of some ill-defined, nation-building exercise is over," a senior Conservative member of the government told me. "We will deal with future security threats in a precise, practical and focused manner, without getting ourselves bogged down in missions that are beyond our control."