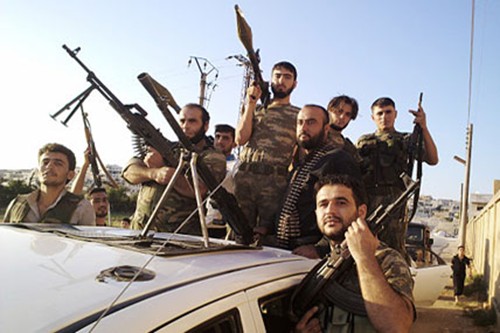 From Shashank Joshi, Telegraph:  [W]e are witnessing the beginning of the end for the Assad dynasty, the last republican monarchy of the Middle East. And events, as they often do, are moving quicker than our policies.

At the end of November, the CIA is reported to have estimated that President Bashar al-Assad had just eight to 10 weeks left. With our attention on Gaza two weeks ago, we missed the turning of the tide. Syrian rebels of all stripes began over-running military bases on a daily basis. They seized heavy weaponry like artillery and tanks, and acquired sophisticated anti-aircraft weapons, which they immediately put to use by shooting down jets and helicopters.

As the regime haemorrhaged airbases, not only did this sap the government’s key advantage – airpower – but it also set in motion a virtuous circle: the spoils of war taken from one base made it easier to capture the next one. What all this means is that Syrian rebels are no longer just harassing checkpoints or sniping at convoys. They are an increasingly potent fighting force with at least some of the appurtenances of a conventional army.

Then, after months of indecisive fighting around Damascus, the capital came under intense attack. The airport was rendered unusable, EU and UN diplomats left the country, and the regime compounded its isolation by shutting down the internet. According to the New York Times, Russian envoys to Assad “described a man who has lost all hope of victory or escape”. And he is not the only one: this week the regime’s most senior Christian figure, foreign ministry spokesman Jihad Makdissi defected. Meanwhile, the deputy foreign minister visited Cuba, Venezuela and Ecuador – presumably to search out opportunities for convivial asylum. . . .

The unprecedented rebel military advances mean that we must start thinking about the endgame itself. We should avoid the illusion of control. We have only limited influence over the direction in which Syria goes, but there are constructive steps we can take. Although Assad would gain little from using chemical weapons, desperate regimes make strange choices. Last year, Colonel Gaddafi pointlessly fired ballistic missiles toward rebel-held territory a week before his regime collapsed. In 1991, Saddam Hussein lobbed 42 missiles at Israel. Nato’s deployment of the Patriot missile defence system to Turkey is therefore prudent.

However, the greater danger is that chemical weapons are seized by extremist groups, whether Hizbollah, which has been training close to some storage sites, or Jabhat al-Nusra, al-Qaeda’s Syrian affiliate. Unless we can be sure that Syrian army units guarding chemical weapons will retain absolute control, it may become necessary to secure, remove or destroy at least some of the stockpiles. This would require a US-led Jordanian force, assisted by trusted Syrian rebels, with Britain and other states likely playing a role. If rapid destruction or removal is impossible, then the sites should be protected by Arab forces. A large-scale Western footprint would be unacceptably dangerous, and should be ruled out entirely.