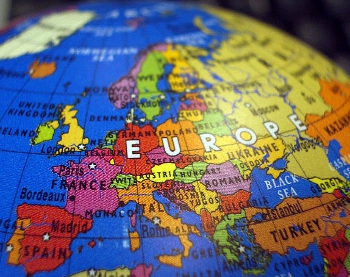 From Josef Joffe, Commentary:  It almost goes unnoticed that the United States is closing a long chapter in its Atlantic history. For 70 years, since the landing in Normandy, America was literally a power-in-Europe, with a vast military presence stretching from Naples to Narvik and from Portugal to Germany. At its peak, the entire force, Navy and Air Force included, numbered 300,000. The Army topped out at 217,000. At the end of this year, the ground troops will have dwindled to 30,000. A massive support structure of American grand strategy is being dismantled. Why is no one weeping or gnashing teeth?

That would have been the response in decades past. From the Korean War onward, when the United States deployed hundreds of thousands to the peninsula, Europeans perpetually nourished a nightmare that the United States, abutting both the Atlantic and Pacific, would abandon them in favor of Asia. To reassure them, the Eisenhower administration dispatched six divisions to the Continent after 1950, promising to keep them there for as long as it took to build up NATO and win the Cold War. This permanent expeditionary force, fortified by thousands of tactical nuclear weapons, held steady for a half century, and even grew when the Soviets ratcheted up the pressure. Yet the angst was ever-simmering, stoked by perennial Senate resolutions demanding a drawdown. And it would roil whenever America’s attention shifted to other locales.

It threatened to bubble over during the Vietnam War, when the United States deployed a half-million men to Indochina. It frothed again as the Middle East became a focus, first during the Six-Day and Yom Kippur Wars, then after the triumph of Khomeinism in Iran. Almost from the start, the terrifying possibility of “rebalancing,” as the idea of redeploying American military assets is now called, was never far from the minds of European geopolitickers.

Still, throughout it all, Europe remained at the center of American foreign policy. The U.S. commitment, shrinking only slowly, survived the fall of the Berlin Wall and the wars in Iraq and Afghanistan. But now, the wolf is at the door. At the beginning of 2012, there were a mere 41,000 troops left; at the end of this year, two more armored brigades will have been pulled out.

Given that the American military presence will virtually be gone from Europe by the time the president-elect puts his hand on the Bible in January 2013, the silence on either side of the Atlantic is astounding. Rebalancing is an about-face of historic proportions. With its vast military presence, America had become a European power after World War II. Now, U.S. grand strategy has finally shifted to the Greater Middle East, to East Asia, and to the Western Pacific. . . .

[W]hat of the condition of the old world? To begin with, it all depends on what we call “Europe.” The chunk we used to worry over most is indeed more stable than it has been for centuries. This is “Core Europe,” stretching from Portugal to Poland. But extend this heavenly sphere, and trouble looms. The fringes are brittle: the Balkans; former Soviet possessions such as the Ukraine, Georgia and Azerbaijan; the Levant with Iraq next door and the southern shore of the Mediterranean. Turkey, now ruled by Islamists, is the joker—sometimes with, sometimes against the West.

EUCOM, the U.S. headquarters, is in charge in all of Europe, the former Soviet Union, and, not to forget, Israel. Its mission is “to conduct military operations…to enhance transatlantic security.” Given the sheer size of the arena, this task is not going to be so easy for America’s dwindling forces. It will be even harder considering that the Europeans have virtually bowed out of the great power game. When Nicolas Sarkozy’s France leapt into Libya in 2011, dragging the rest minus “no-more-war” Germany along, Obama, “leading-from-behind,” had to fly to the rescue, supplying the high-precision ordnance as well as space-based and battlefield surveillance. A decade ago, the Europeans learned they could not bomb even Serbia into submission without the U.S. Air Force.

And when Syria went off the rails, it was off-limits from the start. For Europe, no more of what men once sang in London’s music halls during the Russo–Turkish War of 1877–78: “We’ve got the ships, we’ve got the men, and got the money, too!” The Europeans have none of the above, certainly not the long-range air and naval power. Never mind the distant “halls of Montezuma”; they can’t even fight for six months on the “shores of Tripoli” right across from Sicily, let alone in Syria. Damascus is twice as far from the South of France as the Libyan desert is. While the U.S. still spends about 4 percent of gross domestic product on defense, the Europeans are down to 1. Nor do they have the mental software or the financial capacity to integrate force as an element of their grand strategy. Only France and Britain retain some of the reflexes and remnants of Europe’s ancient warrior culture. Once the master of the universe, Europe has become the Saint Bernard of world politics: toting lots of mass and economic muscle, but lacking the spunk of an attack dog.

The upshot is that Europe is neither equipped nor eager to police its increasingly turbulent (and truculent) neighborhood. If the next American president, Obama or Romney, also “leads from behind,” he may find a bunch of listless indigents milling around front. Leading from behind like a shepherd assumes that the flock is already on the move. Europe’s sheep only want to graze. Leading from behind is not how collective action works among people or among nations. . . .

[]The darkening defense future is the nub of the matter; the number of brigades in Europe is just one chapter of the story. It would have been nice to keep the men and materiel on the Continent, not for nostalgic but for sound, strategic reasons. Europe is simply closer to the theaters where the U.S. might need to fight tomorrow—from the Maghreb to the Mashrek. Forces in situ are even better for not having to fight; they are there for deterrence. And deterrence will be needed. Russia will not let go of its designs on the Ukraine or pesky Georgia or oil-rich Azerbaijan. Iran will keep threatening its neighbors. The chance that the Arab Spring will bring democracy, jobs, and domestic peace to the Arab world is slim. . . .

What is the moral of this tale? You can save some money by pulling out of Europe. But that is not enough to remain Mr. Big if Obama’s budgetary ax keeps chopping away at the Pentagon. It isn’t cheap to be an XXL Britain, not in a world where the locals can fight back with state-of-the-art weapons and deter America from making good on its commitments. This election is like no other since Harry S. Truman’s watershed victory in 1948. Having reversed post-VJ Day disarmament by 1947, Truman had a mandate of sorts to set the United States on the road to global leadership. The same mandate was assumed by the next batch of presidents, Republican and Democrat alike. The results of 2012 will shape the future of American power in the same way. The outcome will either speed up the slide or slow it (don’t count on Romney to be another Reagan who went off to outarm the Soviet Union). But whoever wins, the U.S. would be ill advised to try and out-Brit the Brits with their over-the-horizon strategy. The UK didn’t really care about Europe, except to make sure that it would never fall into the hands of a single potentate like Napoleon. Having done the work, Britain pulled out again.

America should care. After all, who else is there? The cowardly Saudis? The indifferent Indians? The faraway Australians? This is how the Economist put it earlier this year: “While the feeble defense efforts of too many NATO members riles Americans, the organization remains the only vehicle that reliably provides partners when America wants to do something and does not want to do it on its own.” But the Europeans won’t do it unless led from the front. And leadership requires being there, as a power-in-Europe that keeps the NATO machinery humming. The 27 nations of the European Union, mired in crisis and economic stagnation, will not take care of the strategic business of a region that is still as important to the United States as is East Asia.

Also, more than purely strategic interests are at stake. America and Europe constitute the largest trade and investment relationship in the world; together they are good for more than half the global GDP. NATO is the chain that holds it all together. At age 63, NATO is the longest-lived alliance among independent nations, and its longevity certifies its worth. NATO has built a precious edifice of command and training, never mind all the family spats since 1949. It is the world’s anchor of liberal democracy, nothing to sneeze at on a planet where the real thing remains either shaky or remote. Yes, the 21st century’s central arenas will be the Middle East and the Western Pacific; so rebalancing it has to be. But the Atlantic is home. Home is boring and exasperating, yet, in the words of Robert Frost, it is also the place “where they have to take you in.”

Josef Joffe is editor of Die Zeit. He teaches international politics at Stanford, where he is a fellow at the Freeman Spogli Institute for International Studies and at the Hoover Institution. He is writing a book about the false prophecies of American decline to be published in 2013 by W.W. Norton.  (graphic: Matt Sephton/Creative Commons BY NC ND)