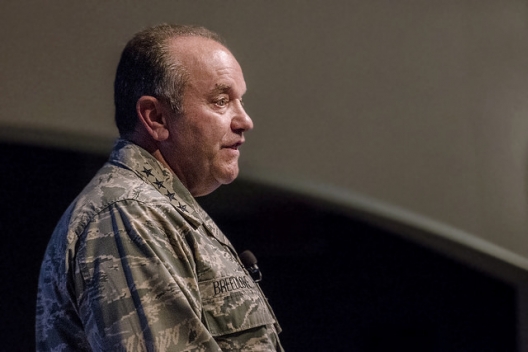 There are signs Russian forces are building up their presence in eastern Ukraine, where fighting in recent days between Ukrainian troops and separatists has intensified, NATO Supreme Allied Command Gen. Philip Breedlove said Thursday.

“What we do see is that the Russian-backed forces have renewed capability now to bring pressure on the Ukrainian forces, and have in several places moved the line of contact to the west. And this is concerning,” Breedlove said during a news conference in Brussels after two days of talks with NATO defense chiefs.

“We are beginning to see the signatures of air defense systems and electronic warfare systems that have accompanied past Russian troop movements into Ukraine, but we are unable at this moment to confirm any specific number of additional Russian troops inside eastern Ukraine,” he said. Two previous Russian incursions involved the movement of similar military hardware, he said.

Lt. Gen. Ben Hodges, commander of U.S. Army Europe, said during a visit to Kiev that it was “irrefutable” that the separatists were getting “direct support from Russia….

“In Brussels, Breedlove and other top NATO military officials concluded two days of talks that focused largely on how the alliance will implement a new Readiness Action Plan. The plan includes the establishment of a new spearhead rapid-reaction force, known as a Very High Readiness Joint Task Force, which has reached interim capability.

Defense chiefs discussed the future shape of the reaction force and will make a recommendation to NATO leadership ahead of a defense ministers’ meeting in February, where an announcement is expected on the unit’s ultimate size and composition.

“2015 will be, and is, a critical year as we work to bring about the greatest change in our approach to collective defense since NATO’s inception,” Breedlove said.