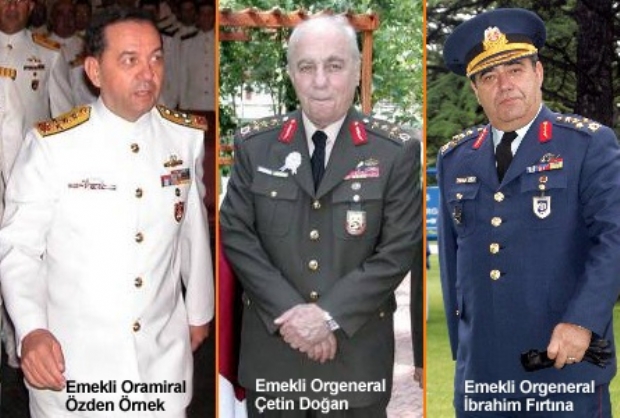 From Zaman:  Three former Turkish generals, who were key suspects in the Sledgehammer coup trial, have been sentenced to 20 years in prison on coup charges.

Former 1st Army Commander retired Gen. Çetin Doğan, former Air Forces Commander Gen. Halil İbrahim Fırtına and former Naval Forces Commander Adm. Özden Örnek were initially given life imprisonment but the sentences were reduced to 20 years on the grounds that the coup plan they drew was a failed attempt. The İstanbul 10th High Criminal Court said in its final verdict on Friday that 34 suspects were acquitted of charges leveled against them. . . .

Sledgehammer is a suspected coup plot believed to have been devised in 2003 with the aim of unseating the Justice and Development Party (AK Party) government through violent acts. According to the Sledgehammer plan, the military was to systematically foment chaos in society through acts of violence, among which were planned bomb attacks on the Fatih and Beyazıt mosques in İstanbul. The plot allegedly sought to undermine the government to lay the groundwork for a coup d’état. . . .

There are 365 suspects, all retired or active duty members of the Turkish Armed Forces (TSK), in the Sledgehammer coup case. A total of 250 of the suspects are currently detained as part of the trial. (graphic: Gazeteciler)