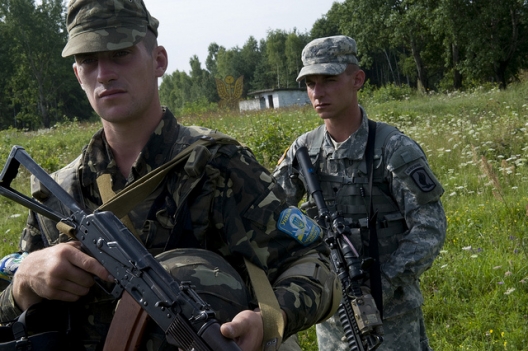 U.S. and alliance actions constitute a red line that depicts Kiev on the outside and on its own. This must be deeply disillusioning for Ukrainians who in recent months have so courageously expressed their desire for freedom and a place in Europe — and whose forces participated in a NATO collective defense exercise as recently as November. This red line can only reassure Vladi­mir Putin and his military planners, whose use of unmarked military personnel — and the plausible deniability they provided — in Crimea reflected at least initial concern about potential responses from the West. . . .

There are prudent defensive measures the United States and NATO can and should take to bolster Ukraine’s security. First, Ukrainian Prime Minster Arseniy] Yatsenyuk’s request for military equipment should be immediately approved, and anti-tank and anti-aircraft weapons should be included. Equipment and weapons could quickly be transferred from prepositioned U.S. military stocks in Europe. . . .

Second, the alliance or a U.S.-led coalition should back that assistance with the deployment of intelligence and surveillance capabilities and military trainers to Ukraine. This would provide not only needed situational awareness and help the Ukrainian military maximize its defensive capacities, but it would also force Moscow to consider the potential political and military repercussions of any actions that affect that presence. The deployment of military trainers to Georgia was one of the more effective elements of the U.S. effort to bolster Georgia’s security after it was invaded by Russia in 2008.

Third, NATO allies and partners should soon conduct a military exercise in Ukraine as part of the effort to train the Ukrainian military. The alliance’s plan to wait until its next scheduled exercise in Ukraine, this summer, could incentivize Russia to take additional military action before then. . . .

NATO’s response to this crisis is critical to both Ukraine’s security and the alliance’s long-term future. A NATO summit planned for September is to focus on the alliance’s way forward in a new world. But what it does to assist Ukraine today and in the coming weeks will have a far more profound influence on its future and transatlantic security.

Ian J. Brzezinski, a senior fellow at the Atlantic Council, was deputy assistant secretary of defense for European and NATO policy from 2001 to 2005.