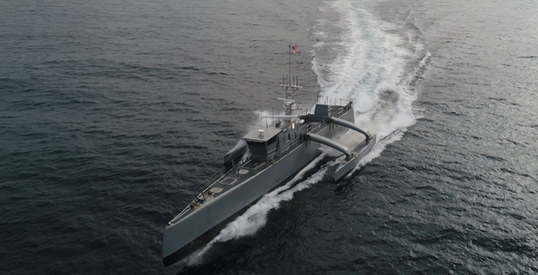 The use of unmanned systems is a potentially game changing leap forward in maritime technology. They will enable us to be significantly more effective in crucial areas such as detecting and clearing mines, and finding and tracking submarines. Working alongside traditional naval assets, these unmanned systems will increase both our situational awareness and our control of the seas.

Defense News:  The U.S. and its NATO allies are teaming up to more closely cooperate on the development and fielding of unmanned maritime systems, according to an agreement signed by the defense heads of 13 NATO allies….

For NATO watchers, the agreement is the latest sign of just how seriously the alliance is taking the threat from Russian submarines.

“NATO members are alarmed by the growing threat from Russian submarines, and are investing more resources to deal with it,” said Jorge Benitez, a senior fellow at the Atlantic Council who previously served as the lead on NATO issues for the Office of the Secretary of Defense. “Under [President Vladimir] Putin, Russia has deployed new, stealthier submarines in the north Atlantic that are much harder for NATO navies to track.

“This new multinational cooperation in undersea drones is the most recent example that NATO is taking the Russian threat in the north Atlantic much more seriously than it has in the past quarter century….”

The renewed threat from Russian submarines has triggered what the U.S. Navy’s Europe commander, Adm. James Foggo, has dubbed “The Fourth Battle of the Atlantic,” harkening back to the fight with German U-boats in World War I, World War II and the standoff with Russia in the Cold War.

But with the expansion of NATO to former Soviet satellite states, the Battle of the Atlantic will sprawl from the Eastern Seaboard all the way to the Baltic and Black seas, areas that Russia has fortified with anti-access, area denial weapons and other capabilities in recent years….

“We don’t have to know everything everywhere,” retired Vice Adm. Michael Connor, former head of American’s submarine forces, told the House Seapower and Projection Forces Subcommittee in a 2015 hearing. “But there are places where you would like to have very good knowledge. We have critical things we want to protect, like some of the undersea infrastructure that is so critical to our economy.

“There may be places we decide we want to have some volume of systems and that relatively small area around that infrastructure where you would have sufficient vehicles to obtain perfect knowledge.”