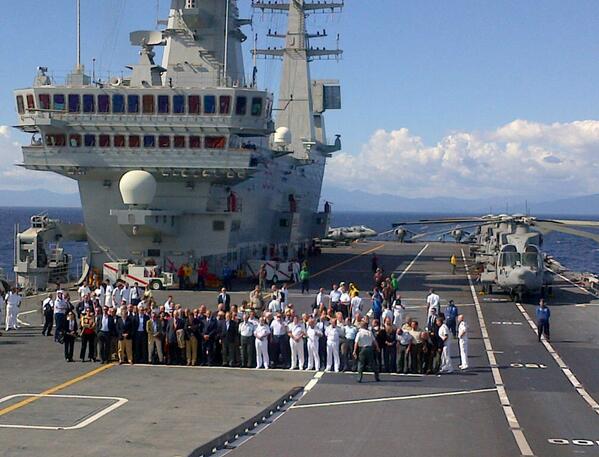 Deputy Secretary General Ambassador Alexander Vershbow together with ambassadors, commanders and other representatives from the North Atlantic Council and NATO’s Military Committee observed Allied naval forces in action in the Mediterranean Sea on Monday (30 September 2013). A large fleet of warships from NATO’s Response Force (NRF) are currently conducting manoeuvres as part of the ”Brilliant Marine” exercise off Italy’s Sicilian and Sardinian coasts. ”This exercise tests, and sharpens, the ability of units from different NATO countries to work together seamlessly,”the Deputy Secretary General said.

Ambassador Vershbow joined by General Knud Bartels, Chairman of the Military Committee, Supreme Allied Commander Europe, General Philip Breedlove and other members of NATO’s top decision making bodies observed the exercise from the flight deck of the Italian aircraft carrier Cavour. “Brilliant Mariner” is one of several major exercises being held this autumn to test the NRF’s crisis response capabilities.

The Deputy Secretary General stressed the importance of exercises like “Brilliant Mariner,” which he said are “a vital part” of keeping NATO’s spearhead Response Force ready for use. He said that NATO is the gold standard of military cooperation between different countries and forces especially after its operations in Afghanistan, Kosovo, and off the Horn of Africa. “It is exercises like this which will keep us ready to deal with any threat, and conduct any future operation together,” said Ambassador Vershbow. “That is why NATO has launched the Connected Forces Initiative, to increase the number and scale of multinational exercises in the years to come, to make sure that our forces are always ready to deploy side by side, and fight side by side.”

Twenty-three ships from six nations are taking part in the exercise as well as over 5,000 military and naval personnel from 14 Allied nations. The exercise, which started on 25 September, runs until 6 October.