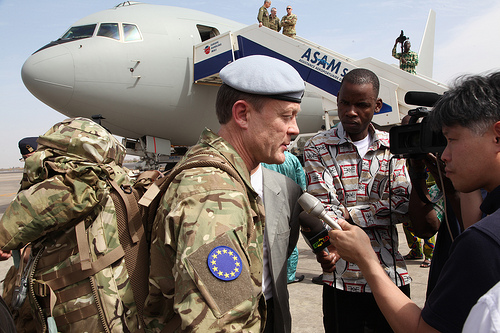 From AFP:  The EU begins an ambitious top-to-toe overhaul Tuesday of Mali‘s ragtag army, far from ready to take the place of foreign troops to defend the West African nation against fresh attacks by Islamist insurgents.

As France prepares to withdraw its 4,000 troops after routing Al Qaeda-linked forces from northern cities, the first of four Malian battalions begins training with battle-hardened European instructors on April 2 as part of a wider effort to bring the army up to scratch as quickly as possible.

After 10 weeks of training, the first 670 Malians are expected to be ready for combat by end June/early July and deployed to northern Mali, where French and Chadian troops are still on the lookout for pockets of jihadist fighters. . . .

A total 23 EU nations are taking part in the 550-strong EU mission, including 200 trainers, a protection force of 150, another 150 providing medical and logistical support, and 50 administrative staff.

France, which sent troops to its former colony in January to block an advance on the capital by the extremists, is the lead country in the mission, followed by Germany, Spain, the Czech Republic, Britain and Belgium. Lithuania is taking part in such an operation for the first time.

In February, the EUTM sent a score of officers to Bamako to take stock of the state of the armed forces. A plan was submitted to the local authorities in March on how to rebuild the army which will also be drilled in relations with civil society and protection of human rights.

Once trained, each of the four Mali battalions will have a unified command with an infantry-mobile core, backed by artillery and engineering, and a logistics component.  (photo:  EEAS)