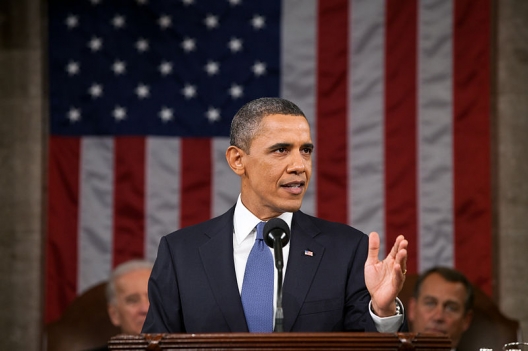 My first duty as commander in chief is to defend the United States of America. In doing so, the question is not whether America leads in the world, but how. When we make rash decisions, reacting to the headlines instead of using our heads; when the first response to a challenge is to send in our military – then we risk getting drawn into unnecessary conflicts, and neglect the broader strategy we need for a safer, more prosperous world. That’s what our enemies want us to do.

I believe in a smarter kind of American leadership. We lead best when we combine military power with strong diplomacy; when we leverage our power with coalition building; when we don’t let our fears blind us to the opportunities that this new century presents. That’s exactly what we’re doing right now – and around the globe, it is making a difference.

First, we stand united with people around the world who’ve been targeted by terrorists – from a school in Pakistan to the streets of Paris. We will continue to hunt down terrorists and dismantle their networks, and we reserve the right to act unilaterally, as we’ve done relentlessly since I took office to take out terrorists who pose a direct threat to us and our allies.

At the same time, we’ve learned some costly lessons over the last 13 years.

Instead of Americans patrolling the valleys of Afghanistan, we’ve trained their security forces, who’ve now taken the lead, and we’ve honored our troops’ sacrifice by supporting that country’s first democratic transition. Instead of sending large ground forces overseas, we’re partnering with nations from South Asia to North Africa to deny safe haven to terrorists who threaten America. In Iraq and Syria, American leadership – including our military power – is stopping ISIL’s advance. Instead of getting dragged into another ground war in the Middle East, we are leading a broad coalition, including Arab nations, to degrade and ultimately destroy this terrorist group. We’re also supporting a moderate opposition in Syria that can help us in this effort, and assisting people everywhere who stand up to the bankrupt ideology of violent extremism. This effort will take time. It will require focus. But we will succeed. And tonight, I call on this Congress to show the world that we are united in this mission by passing a resolution to authorize the use of force against ISIL.

Second, we are demonstrating the power of American strength and diplomacy. We’re upholding the principle that bigger nations can’t bully the small – by opposing Russian aggression, supporting Ukraine’s democracy, and reassuring our NATO allies. Last year, as we were doing the hard work of imposing sanctions along with our allies, some suggested that Mr. Putin’s aggression was a masterful display of strategy and strength. Well, today, it is America that stands strong and united with our allies, while Russia is isolated, with its economy in tatters….

No foreign nation, no hacker, should be able to shut down our networks, steal our trade secrets or invade the privacy of American families, especially our kids. We are making sure our government integrates intelligence to combat cyber threats, just as we have done to combat terrorism. And tonight, I urge this Congress to finally pass the legislation we need to better meet the evolving threat of cyberattacks, combat identity theft, and protect our children’s information. If we don’t act, we’ll leave our nation and our economy vulnerable. If we do, we can continue to protect the technologies that have unleashed untold opportunities for people around the globe.