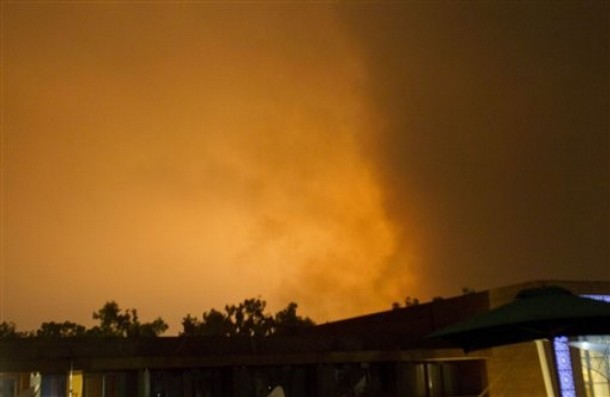 The shockwave from the strikes was so powerful that plaster fell from the ceilings in a hotel where foreign reporters were staying, about 2 km (1.2 miles) from Gaddafi’s compound.

A NATO official said the strikes hit a military facility that had been used to attack civilians. A Libyan government spokesman said three people had been killed and 150 wounded, and that the casualties were local residents.

"It is definitely, in terms of one target, the largest and most concentrated attack we have done to date," said the NATO official in Brussels."

"This complex is where members of the Gaddafi regime, not only military, but hit squads, were based out of in the early days of the violent suppression of the popular uprising, and it has been active ever since," the official said.

Libyan government spokesman Mussa Ibrahim said the strikes had targeted a compound of the Popular Guards, a tribally based military detachment.  (photo: AP)