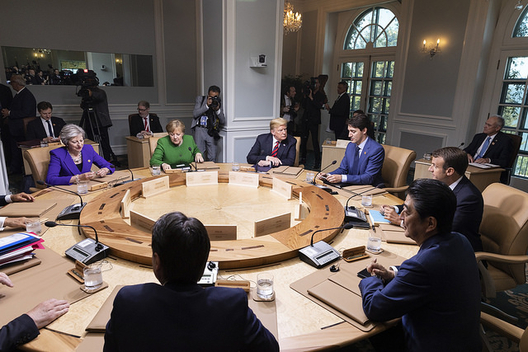 AXIOS: In one extraordinary riff during his meeting with the G7 heads of state earlier this month in Quebec, [President Donald] Trump told the other leaders: “NATO is as bad as NAFTA.” An official read this quote to me from notes transcribed from the private meeting.

Behind the scenes: Trump made the comment after telling the G7 leaders that Crimea probably should belong to Russia because everyone there speaks Russian, the source added. Trump then went on his usual riff about Germany not paying its fair share of defense spending, said the Europeans weren’t paying enough and that the U.S. is being ripped off.

Then Trump said of the NATO Summit on July 11-12 in Brussels: “It will be an interesting summit. NATO is as bad as NAFTA. It’s much too costly for the U.S….”

By linking NATO to NAFTA — a trade deal that Trump considers an unmitigated disaster for America — Trump reinforced some of the Europeans’ worst fears that he’ll take a purely transactional approach to next month’s summit.

Officials from four NATO member countries have told me they’re worried Trump undercut the shared values and commitments of the NATO alliance by spending most of his time bashing NATO members for not “paying enough” and meeting their defense spending commitments….

Guardian: Trump’s inflammatory remarks – made in private at the G7 summit in Quebec earlier this month – were first reported by Axios and confirmed on Thursday by two European officials.