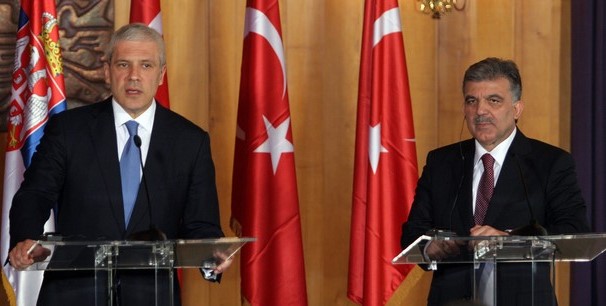 From Jovana Gec, the AP:  Turkey wants to help turn the war-ravaged Balkans into a region of cooperation with a joint future in the European Union and NATO, the Turkish president said Tuesday , as part of his country’s increased involvement in the region where it has historic influence.

"It is our desire to have the whole region united under a wider umbrella of the European Union and NATO," Abdullah Gul said after talks with Serbia’s President Boris Tadic and the three members of Bosnia’s multiethnic presidency. . . .

The talks at the Karadjordjevo residency near the border with Croatia came a year after Turkey hosted a similar summit in Istanbul, aimed at bringing former Balkan foes Serbia and Bosnia closer together.

Turkey’s diplomatic initiative illustrates its bid to renew its influence in the Balkans stemming from centuries-long Ottoman rule and close ties with the region’s Muslims.

"Turkey has its historic reasons and … legitimate interests for its presence in the Balkans," Serbia’s president Tadic said. "We want the entire region to be integrated into the European Union as soon as possible … this is our main political goal. . . ."

Tadic did not elaborate on Gul’s proposed NATO ties. The issue is sensitive among the Serbs because of the Western military alliance’s 1999 bombing of Serbia that ended Belgrade’s rule over Kosovo, Serbia’s former province.  (photo: Getty)